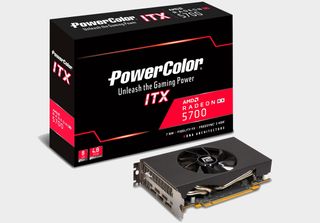 PowerColor is apparently selling a mini-ITX version of AMD's Radeon RX 5700 in Japan, and I really hope the company decides to make it more widely available. If so, this could end up being the best graphics card for small form factor (SFF) builds.

I say this because the full-size 5700 is already one of the top GPU options in terms of frames per dollar—the bang-for-buck factor is high, and compares favorably even to Nvidia's Super counter-punch to Navi. Given that the mini-ITX landscape is somewhat of an afterthought for higher end GPUs, I think PowerColor's pint-sized card could sell well.

Japanese publication Hermitage Akihabara spotted the card at Aiuto-jp, which as far as I can tell is a distributor in Japan. The site claims the mini-ITX model is exclusive to that region. I've reached out to PowerColor to see if that's true or if there are plans to expand the release to other parts of the world, and will update this article when I hear back.

In the meantime, let's go over the specs. PowerColor has opted to stick with AMD's reference blueprint, meaning the mini-ITX model features a 1,465MHz base clock and 1,725MHz base clock. It also wields 8GB of GDDR6 memory at 14Gbps, on a 256-bit bus.

It makes sense not to factory overclock this model, considering it's designed to fit inside SFF systems where airflow (and heat management) can be a bit of a challenge. The card itself measures just 175mm long. That's enough room to fit a single cooling fan, which works in conjunction with a standard heatsink and four 6mm copper heatpipes.

Mini-ITX PCs are smaller than even micro-ATX builds (usually, anyway). They're great for places where space is in short supply, such as a college dorm or anywhere else a person might not want a hulking tower (or even a regular sized tower).

Despite their diminutive nature, it's possible to build a potent gaming PC around the form factor. The GPU is the primary challenge, though, and to that end, PowerColor's Radeon RX 5700 ITX would join a spattering of mini-ITX GeForce GTX cards. A quick check on Newegg, for example, yields a few options:

The 5700 is faster than any of those models, making it an enticing option in the mini-ITX space. We'll have to wait and see what PowerColor decides to do, though. Zotac is also known for making compact graphics cards, but I'm not seeing anything in the modern space that is shorter than around 210mm.