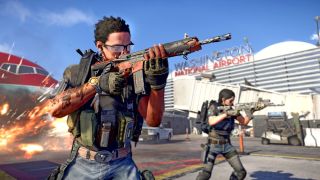 The Division 2 isn't yet a year old, but Ubisoft is already selling it for peanuts in its Lunar New Year Sale. The base game, season pass and special editions are all 85% off, so you can get started for only £7.50, and for another £8.50 you can get all the Year 1 DLC.

While The Division 2 has had some steep discounts before, this is the cheapest we've seen it. While it's good news for prospective players, it does suggest that Ubisoft's live service shooter isn't doing so hot. We already know that the publisher has been disappointed with its performance, despite it being one of the year's top-selling games.

At this price, however, it's well worth taking the plunge. I don't have room in my life for any more of these massive games and bounced off it pretty quickly, but I had fun while I stuck around. Samuel Roberts gave it an 82 in his Division 2 review, calling it an "hour-eating and frequently thrilling excursion into Washington DC."