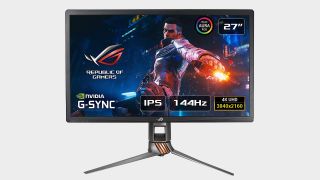 When I think of what to buy on Black Friday, the first thing that jumps to mind is: 4K TVs. The technology is getting more pervasive so the deals get better and better every year. It’s a little tougher to say whether the same is true of 4K PC monitors. Display manufacturers have been slower to adopt 4K than TV-makers. In general, 4K resolution is still a high-end spec, and many of the best gaming monitors still don't have it. Still, while they get less attention than their coax-carrying cousins, gaming monitors are generally popular targets for Black Friday deals, and it isn’t unheard of for 4K monitors to go on sale. If you’re in the market for a 4K monitor, chances are you will find a deal on one this holiday season.

If you need a new GPU to go 4K, check out our Black Friday graphics card guide

That said, I expect it will still be a bit of a "beggars can’t be choosers" situation. In 2018, retailers put a fairly wide swath of monitors on sale, including some 4K panels. That said, the monitor market has not pushed hard towards 4K in 2019 so there’s no reason to think that there will be a strong emphasis to get them out the door this holiday season. Rather, I expect that (like last year) there will be a few spotlight 4K monitor cuts sprinkled throughout a larger wave of monitor deals.

Why? They were last year.

In general, 4K monitors didn’t receive better or worse treatment than other panels during Black Friday monitor sales in 2018. The deals tend to be relatively tame, and it isn’t easy to predict what specific monitors will get cuts. One trend I noticed: Freesync monitors seemed to be more likely to go on sale than G-sync monitors last year. Will that hold up? I’d say yes.

Then again, prices this year are already dropping lower than ever. Multiple retailers have already kickstarted their holiday sales programs well ahead of Thanksgiving, so we’re already starting to see the same kinds of deals stores were throwing out on Black Friday in 2018. That same Predator X27 monitor is down to $1399 on Amazon and Best Buy right now. That’s kinda crazy.

The question is: will there be better sales once Black Friday rolls around? There’s no way to know for certain, but I’d say there will be more deals, though most will be on new products, rather than offering deeper discounts. So, if you have your heart set on that one panel from our best 4K monitors for gaming list, it may make sense to hold out if it isn’t already on sale.

If you’re simply looking for the best deal: whether you’re upgrading from 1080p to 4K, or ogling a larger display, make sure you know what you’re getting for your money, not just the price drop. A lot of 4K monitors, for example, don’t hit the same refresh rates as modern 1080p models, so make sure you’re aware of what you stand to lose, in addition to what you’ll gain.

As with all PC components, there’s always a better, more expensive version of what you want. With monitors in particular, I think it’s best to simply pick a price and keep an eye out for deals that move more expensive monitors into your price range. If you’re on the hunt, check out our Black Friday video game deals hub before, during, and after Black Friday to get updates on the best PC gaming deals the holiday season has to offer.