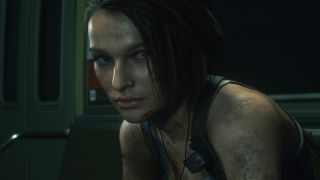 Hot on the heels of Capcom's excellent remake of Resident Evil 2, an equally pretty Resident Evil 3 remake is on the way and releasing sooner than expected. The graphical upgrade is a gigantic leap forward from the original PlayStation, of course. But still, man, look at those faces. But please don't linger too long on Nemesis's new face, lest the nightmares take hold.

What is the Resident Evil 3 remake release date?

Resident Evil 3 is coming out April 3, 2020 on PS4 and PC. Every copy also comes with Resident Evil Resistance, the asymmetrical 1v4 competitive take on the series Capcom revealed back in September.

Just a whole bunch of good stuff in here. It's nice to get out of the confined spaces of RE2 and get a good look at a very pretty (and deeply troubled) Raccoon City.

Resident Evil 3 Remake is designed with action in mind

"If you compare Resident Evil 3 to the second installment, it leans more toward action. So we remade everything based on that premise," said producer Masachika Kawata in an introduction video for the game. Like the original game, expect the new remake to feel more run-and-gun than RE2. Just don't go full Hollywood action movie like Resident Evil 6, and you should be fine.

Jill has a new look

Nemesis is back, baby

Unfortunately for Jill, her creepy stalker is back, too. Remake Nemesis looks like a real bastard, and will apparently have "more ways than Tyrant from Resident Evil 2 to track down his target, Jill Valentine." Sounds terrible!

Though we may have to be prepared for Nemesis' scare tactics to lose potency once PC players get their hands on the game. In Resident Evil 2 Remake, you can make Mr. X a tiny little scare boi or something worse altogether: Thomas the Tank Engine.

Resident Evil Resistance is included with RE3 Remake, and this guy's name is... Martin Sandwich

Every copy of the Resident Evil 3 remake will also come with Resident Evil Resistance, an asymmetrical 1v4 competitive shooter. Similar to popular multiplayer horror game Dead By Daylight, Resistance pits four survivors against one Mastermind. Instead of taking direct control of monsters, the Mastermind floats around the map strategically placing traps and enemies to prevent the survivors from escaping.

It's a cool concept, but its success relies on players keeping interest past the first month of release. If it's supported post-launch, it could be great.