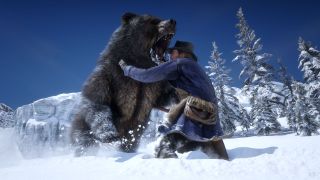 Rockstar has already done a bit of boasting about the ongoing success of GTA 5 and Red Dead Redemption 2, especially their online components, and now Take-Two has provided some more numbers to put it into context.

In its recent quarterly earnings call, the publisher announced that GTA 5 sales exceeded expectations, despite it entering its seventh year, boasting more than 120 million lifetime sales. You'd think that everyone who wanted it would already have it, but no, another 20 million people picked it up last year.

The arrival of the Diamond Casino gave GTA Online a bump, which has been on a roll for the last couple of months. At the age other online games would be dipping, GTA Online is only getting busier and, for Take-Two and Rockstar, more lucrative.

Red Dead Redemption 2 has a lot of catching up to do, but after its big PC launch it now boasts more than 29 million sales, nearly doubling the sales of its predecessor. While Red Dead Online had a bumpy start when it launched on consoles, Rockstar's managed to hammer it into something a lot more entertaining since then, with Take-Two saying it's "gaining momentum."

The cowboys seem to be spending a lot, with microtransactions outperforming the publisher's expectations. And the cowboy population is growing, too, with a new record set in December and again in January. This is thanks to the Moonshiner update, but was no doubt helped by the game's first festive event and a multitude of freebies.

Together, the combined sales figure is over 150 million, but things haven't been as rosy across Take-Two. Despite the launch of Borderlands 3 and The Outer Worlds last year, quarterly revenue is down, while the announcement that Rockstar co-founder Dan Houser is leaving the company seemed to leave investors worried, with stock dipping. Take Two CEO Strauss Zelnick said that Houser had been on leave since spring last year and no other departures are planned, with Sam Houser staying on.