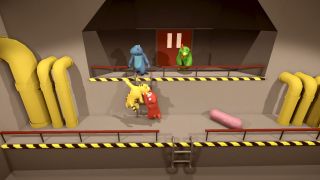 In the crowded field of local multiplayer games where up to four players can compete to pummel the guts out of each other through their faces, Gang Beasts stands out. Its clumsy balloon-limbed characters wear animal costumes, its levels include a ferris wheel and the tops of several moving trucks, and its physics turn everything into a stumbling shambles. Gang Beasts is still in early access but it's already hilarious.

On Steam Gang Beasts is free to try for the weekend as a way of stress-testing its new server architecture, networking, and so on. This is a perfect opportunity to sample a game that made our list of the best local multiplayer games and our list of 12 PC games with amazing combat.

That's no joke! The way Gang Beasts lets you control your arms independently, grabbing with one while punching with the other for instance, or just clambering up a wall over a pit while somebody else clings to your foot, turns every match into a perfect slapstick movie brawl.

The free weekend has started now and will end at 9pm Pacific time on Sunday, September 24. It's 33% off for the duration as well.

The first game Jody professionally reviewed was Audiosurf, for a music magazine he worked at in 2008. He's been writing for PC Gamer since 2015, and is that guy who keeps voting for text adventure Spider & Web in our list of the Best PC Games. Every. Year.
See comments