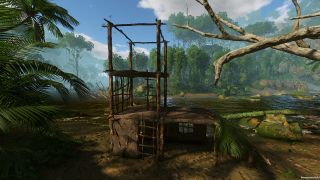 Green Hell, the amazonian survival game that made Christopher Livingston so mad he punched an armadillo, now has mud huts with two, even three stories. Remarkable, I know. The Expanded Shelters update brings the ability to make your mud and bamboo buildings into multi-story wonders with new doors, walls, ladders and ceilings. Just imagine the possibilities: A sprawling mud mansion, a clay castle, a veritable Versailles of molded muck, a manor in the mire, perhaps even several châteaux of sprawling, stately sludge.

A survival crafting game highlighting the challenges of jungle environments, Green Hell released earlier this year and ranks as one of Steam’s Best of 2019 new releases, according to Valve. It’s one of those few survival games with a full single player campaign, like The Forest. Expanded Shelters is the second content update to the game since its full release, following last month’s plant cultivation expansion. The next update is slated to add a cooperative mode to Green Hell, according to the developers’ roadmap, and should release in early 2020.

You can find Green Hell on Steam, presently 20% in the winter sale, or go check out the official website.