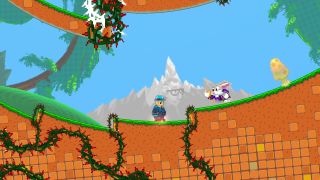 Horace is an unpredictable platformer with a narrative bent and plenty of mechanical twists. It's not what it always seems, but to find out more you'll need to take it for a spin yourself. Thankfully, it's free on the Epic Games Store for a week.

OK, maybe you can find out a bit more before you take the plunge. Here's Dominic Tarason's take on why this weird platformer is more than worth a look:

Six hours into Horace and after several genre shifts, I officially gave up trying to predict what this narrative-driven adventure was hiding up its sleeve next. What started as a gentle if cutscene-heavy platformer about a robot butler and his quest to clean up rubbish had metamorphosed into a grand, generation-spanning adventure, dense with pathos, some dark humour, plus some genuine tragedy when you least expect it. Best, then, to go with the flow and see where the story took me.

You can grab Horace for free on the Epic Games Store until January 23, followed by monochromatic puzzler The Bridge.