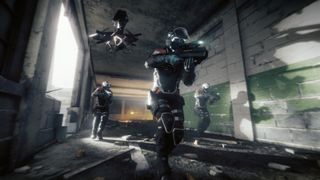 We haven't heard much about Homefront: The Revolution, the sequel to THQ's much-maligned Red Dawn-esque shooter Homefront. It was announced in 2014, delayed in 2015, and that's really been about it. Today at Gamescom, however, Deep Silver rolled out a new cinematic trailer to remind people it still exists, and revealed a bit more about what's coming.

Homefront: The Revolution will be an open-world shooter set in the city of Philadelphia, which—along with the rest of the US—is under the oppressive control of a globe-spanning Korean corporation. That sounds a bit different than the North Korean invasion scenario the game was initially built on, with the Korean People's Army causing all the trouble, but it could be just an issue of wording. We'll let you know when we find out.

Other than that, it sounds pretty much as expected. Players will conduct a guerrilla war against an overwhelmingly superior occupation force, making use of hit-and-run tactics, ambushes, and improvised weaponry to help balance the scales. The open world setting has been designed for "thrilling, unscripted firefights," and the game will also enable the formation of multiplayer "resistance cells" in an online co-op mode.

We'll have more to tell you about Homefront: The Revolution following our hands-on time with it at Gamescom tomorrow. Until then, screens—Wolverscreens!