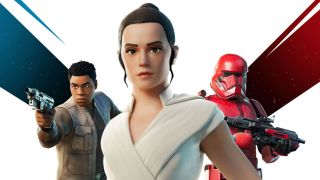 What time is the Fortnite Star Wars event? Soon my young padawan, soon. Epic Games' battle royale behemoth has enjoyed myriad crossovers in its two-year lifespan, but this extra special one comes from a certain galaxy far, far away you'll probably know rather well by now. As the launch of the final episode the world-conquering saga's main series, Star Wars: The Rise of Skywalker, is imminent we have the opportunity to get a sneak peek of the upcoming space blast-a-thon, in Fortnite. And wield our very own Fortnite lightsaber.

No, I'm not kidding, and I find your lack of faith disturbing, frankly. Until the film releases worldwide on December 19, Fortnite's in-game cinema will be the only place where you can see the exclusive footage presented by none other than director J.J. Abrams himself. So buckle up for everything you neshould know including the Fortnite Star Wars event time, the spot where you need to dive to from the Battle Bus, and all the other cosmetics you can add to your inventory.

The Fortnite Star Wars event time is December 14 at 2:10pm ET. Due to what seems like technical issues that are stopping players logging in, @FortniteStatus has confirmed a ten minute delay on Twitter. So for other territories, that's 7:10pm GMT, and 11:10am PT. Doors to the cinema are now open. That means you hopefully haven't got long to wait before you can find out what's going to happen to Rey, Kylo Ren, and co.

If this is anything like the Fortnite Marshmello concert held in-game in February, you might not have to worry about getting shot just as you're reaching for the popcorn emote. While you might be thinking, 'hey, it's a trap!', guns were disabled in the temporary mode through which you could experience Marshmello's gig. Chances are something similar will be the case here.

Where is the Fortnite Star Wars event?

The event kicks off in the cinema at the Fortnite Risky Reels area. The thing is, since the launch of the new Fortnite Chapter 2 map, there's no writing to inform players where this spot is at the moment.

If you're a lapsed Victory Royale chaser whose now unfamiliar with your new surroundings, check out our bespoke Fortnite Risky Reels guide, to make it as simple as possible for you to join your special screening.

It wouldn't be a Fortnite crossover without some themed skins to give you a nice little memento to cherish in your inventory. Plus, I'm not sure I could handle the dissonance of turning up to Star Wars screening as Jim Hopper from Stranger Things.

Instead you have the chance to dress as Rey, Finn, or a Sith Trooper, with gliders, emotes and other interstellar cosmetics available for purchase. However if you feel like saving your Fortnite V-Bucks, you'll bag the Whisper Glider (pictured above) free just for attending the event. What better way to ensure that the floss will be with you. Always.