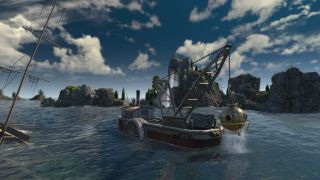 The first add-on DLC for Anno 1800 arrives later this month, and adds a bit of whimsical League of Extraordinary Gentlemen flair to the 19th century city builder.

Sunken Treasures sends players off in search of shipwrecks lost to the ocean's depths after a major naval battle. Ubisoft reckons this new quest will add another six hours to the game's storyline, and it unlocks once you've amassed 700 artisans. Once it does, you'll gain access to Cape Trelawney, the site of the naval battle and the home base for undersea expeditions.

This map is three times the size of the largest islands in Anno 1800, which means there's plenty of space to spread out in and experiment.

A key to the DLC is a character called Old Nate. Nate lives on his own island, working on inventions and probably not an evil plan to conquer the world (this is Anno, and that's your job after all). Using scrap you salvage from shipwrecks, Nate can provide a wide range of fanciful devices. Ubisoft hasn't shared many details on these, but in the blog post detailing Sunken Treasures they do mention automatons. So, it's probably fair to expect these to be on the strange side.

Sunken Treasures launches alongside Game Update 4 on July 30. The developers will share more details during a Twitch livestream July 23 at 4:30 p.m. CEST.