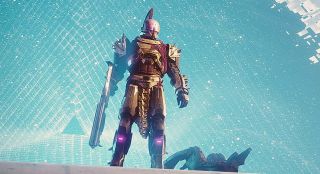 The latest This Week at Bungie is mainly a recap of the big Destiny 2 announcements that dropped earlier this week, including a teaser for Saint-14's return and a livestreamed look at some of the other changes coming in Season of Dawn. But it expands on all of that a bit with some bullet-point specifics on more granular changes, including small increases to Power and Pinnacle reward caps and a long-awaited buff to Thundercrash, the Striker Code of the Missile Super ability, that's been given a boost to base damage, in-flight damage, and the amount of time you can stay in the air after it's activated.

The new TWAB also reveals changes coming to the Eververse Store that will see a significantly increased amount of inventory made available for Bright Dust along with the premium Silver currency. Roughly 50 percent of Eververse items will have been purchasable with Bright Dust at some point during the Season of Undying by the time it wraps up next week, but Bungie aims to get that up to around 80 percent for Season of Dawn. The Eververse Store will also prevent the purchase of items already in your collection in the new season, in order to ensure that people aren't blowing Silver or Bright Dust on stuff they already have.

Tweaks will also be made to the Bright Dust economy in the new seasson. "In Season of the Undying, we changed Bright Dust from a pay-and/or-play-to-earn currency to a play-to-earn reward. We want all players to be able to acquire a selection of their favorite Eververse content every season just by playing the game, and we’ve been keeping an eye on the Bright Dust economy in Season of the Undying with this in mind," Bungie explained.

"In Season of Dawn, all Dawning Weekly and Repeatable bounties will award Bright Dust in quantities equal to the amount awarded from strike, Crucible, and Gambit bounties (200 per weekly and 10 per repeatable). Crimson Days will do the same for Weekly bounties only, as this event does not include Repeatable bounties."

Destiny 2: Season of Dawn goes live on December 10. And as promised, bullet points: