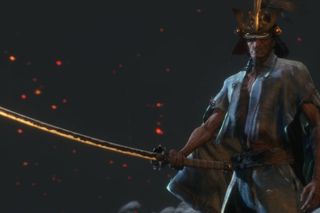 He's very excited to be on top.

Steam has released its official Best of 2019 charts, showing the top sellers, new releases, VR games, and Early Access releases, along with the games sporting the most simultaneous players. Divided into Platinum, Gold, Silver, and Bronze categories, the lists feature some surprises and a few real coups. Warframe, CS:GO and Dota 2, for example, are free games that nonetheless sit at the platinum tier of the Top Sellers category. Destiny 2 is also in the top sellers, despite only being on Steam for a third of the year.

Strategy titan Total War: Three Kingdoms also makes out like a bandit, sitting at the top tier in top sellers, top new releases, and most played games lists. Sekiro: Shadows Die Twice, predictably, does the same. Some might be surprised to see Halo: Master Chief Collection in the top tier of most played games, but its availability on Xbox Game Pass has apparently done nothing to dampen Steam players’ enthusiasm to own and play it on their storefront of choice. Several high profile Early Access releases also marked the year, with Oxygen Not Included, Astroneer, Slay the Spire, and Space Engineers making their way to full release. The VR category continues to underwhelm, Beat Saber aside, with few of the games in the lead there garnering much critical praise.

You can check out the Steam Best of 2019 right here. It’ll be interesting to see how these charts compare to the Steam Awards when those are decided.