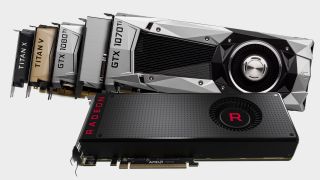 We found all the best cheap graphics card deals for the week just for you.

Anyone building a gaming PC knows that finding cheap graphics card deals is often an arduous process. For the most part, GPU price drops don’t happen too often which makes them easy to miss. We know that graphics cards are usually the most expensive components in your PC, so we're always keeping an eye out for all the best graphics card deals we can find.

The cash you save on graphics cards means you can invest in better components like a bigger SSD, faster CPU, or an awesome gaming keyboard and mouse. Just make sure if you’re opting to get a powerful video card that the rest of your PC’s components work well with it so you don't lose out on performance.

If you don’t the differences between GTX and RTX or don’t know which of the AMD cards are worth your cash, consult our GPU hierarchy and see how each card ranks against each other.

NVIDIA GeForce RTX 2060 Founders Edition | $299 (save $50)
Nvidia just dropped the price of its basic Founders Edition version of the RTX 2060 to $300, making it one of the cheapest versions of this GPU available. (Posted: 1/16)View Deal

The best graphics card in 2019

Nvidia's GeForce RTX 2080 Ti is the latest and most potent GPU around, and it's also one of the largest consumer GPUs ever produced. The Turing TU102 is 60 percent larger than the Pascal GP102 in the 1080 Ti, with 55 percent more transistors. Those extra transistors went into more CUDA cores, but Nvidia didn't stop there, adding in Tensor cores to help accelerate deep learning algorithms like DLSS, plus RT cores to accelerate ray tracing.

There are plenty of other enhancements in the Turing architecture as well, but if you want the best, be prepared to shell out: the cheapest 2080 Ti cards start at $999, with many selling for $1,199 and up. Technically there's also the Titan RTX, which more than doubles the price of the 2080 Ti, but it's more of a prosumer card that anything we'd recommend for pure gaming purposes.

If you're looking for the best value, forget about the new RTX cards. On the other hand, if you're eyeing a 4k 144Hz HDR G-Sync display and you want the absolute fastest graphics card around, this is the card for you. You could even try adding a second card and using an NVLink connector, assuming you just won the lottery. (Note that the current ray tracing enabled games do not support multi-GPU with DXR (DirectX Raytracing) enabled, so we don't recommend this!) We're unlikely to see anything substantially faster for at least a year, so you'll be able to sit comfortably at the top of the pecking order for a while.

The biggest issue with DXR and RTX hardware right now is that lack of games, although this problem is getting less and less significant. There were a few major games when these cards first launched (Battlefield 5, Assetto Corsa Competezione, Metro Exodus, and Shadow of the Tomb Raider), plus a few tech demos (Quake 2 with RT) and some overseas titles (Justice). But with Unreal Engine and Unity both supporting DXR, we should start seeing more ray tracing games later this year, and early next - Cyberpunk 2077 and the Call of Duty reboot have already announced they'll support ray tracing, with Control, Wolfenstein: Youngblood, recently adding it for their launches.

The best graphics card for 1080p on a budget

While nowhere near the top of our list for power, this is a superb value pick if you're looking for performance on a budget. AMD's Polaris architecture has been around a few years, and while it's beginning to show its age, it's also significantly cheaper now than when it launched. It's an excellent card to tackle the current 1080p era of gaming, and if you're still leaning on integrated graphics or an older card, it's a cheap upgrade.

Overall, the RX 570 4GB typically comes out slightly ahead of the GTX 1650 4GB. It does draw more power than Nvidia's Turing-in-a-GTX-shell 16-series of cards and the 1060, but it can also regularly be had for $30-40 less than either of Nvidia's closer competitors.

Most desktops are more than capable of running this 150W card without any difficulty, though you'll need at least a 6-pin power connector, or possibly an 8-pin connector. Sales routinely drop the price of RX 570 4GB cards to $110-$120, so as long as your PSU is up to snuff, the RX 570 pretty much kills off the market for anything lower. If you're building a budget PC or upgrading from an older, outdated GPU, the RX 570 is a great starting point.

The best graphics card for 4K at a (fairly) reasonable price

Sure, the RTX 2080 Ti is the fastest graphics card and has all sorts of cool and potentially useful features, but at the current prices it's a tough pill to swallow. Dropping down to the brand new RTX 2080 Super will get you still excellent performance—it's the second fastest consumer GPU, edging out the base 2080 and GTX 1080 Ti—and save you a bunch of cash, as the Founder's Edition retails for $700. And you still get the same ray tracing and deep learning (eg, DLSS) features, albeit not quite as many of each core type (though still more than the vanilla 2080).

The one major caveat right now is that we're still waiting for more universal adoption of ray tracing and DLSS. We've got Battlefield 5, Metro Exodus, Shadow of the Tomb Raider, and Control (with unreleased games like Cyberpunk 2077 and the Call of Duty reboot recently climbing on the bandwagon). The RTX 2080 Super can run all of those games with ray tracing, though if you're looking for 4K Ultra and 60FPS the Super isn't quite there. That said, it can deliver very playable frame rates in the vast majority of triple-A titles at 4K, though on the extreme end you may need to tweak some settings down (Metro Exodus for instance, with its taxing global illumination ray tracing, is a strain). Even with a $700 GPU, 1440p typically works best at slightly reduced ray tracing quality mode and with DLSS enabled.

The ray tracing future may sound great, but what if you can't afford $700 or more on a graphics card? That's where Nvidia's RTX 2070 Super enters the picture, the middle option of the new lineup (with the 2080 Super launching on July 23rd). The 2070 Super retails at $499, the same price as the vanilla 2070 at launch, and offers a substantial performance improvement. That's still a lot of money for a graphics card, and the 2070 is only about tied with the previous generation 1080 Ti (see below), at least in games that don't support DLSS—which is still most games.

The RTX 2070 Super moves to the TU104 chip from the base version's TU106, enables more cores, and increases clockspeeds. The performance bump is pretty predictable but also very welcome when it doesn't come with an increase in price. As a play to stay ahead of AMD's RX 5700 and 5700 XT launch, it's very convincing, though as a new product stack it's not earth-shaking.

The 2070 Super can attack triple-A games at 4K if you're willing to turn down graphics settings to medium or high, and it does an excellent job of pushing more than 60 FPS at QHD. Needless to say, if you're got an incredibly high refresh monitor or TV, you can squeeze some very high rates out at 1080p Ultra. The 2070 Super may not be a revolution, but it's an excellent card at a very convincing price.

The best graphics card for 1440p and 144hz FHD performance

For DXR and ray tracing games, 1080p with DLSS often works well, and in a few cases 1440p with DLSS. Don't be shy about turning the ray tracing setting down a notch as well, as in most games so far there's not much visual difference between ultra and high quality DXR modes.