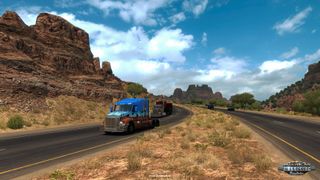 One of the main things about America, THE main thing maybe, is that it's big. Like, really big. That bigness wasn't really represented all that well by American Truck Simulator, which features a fairly truncated slice of America to drive all over. Acknowledging complaints that its roads are too teeny, developer SCS Software has announced that the sim's world is soon to expand, from a map of 1:35 scale to one of 1:20 scale, basically resulting in 75% longer roads out in the wilderness. The new scale will be equivalent to that of the map in Euro Truck Simulator 2, and as you can see from this visual demonstration, there'll be a pretty substantial increase in the size of the world.

What does more world mean? More room for expansions, obviously, although it will take "several months" for SCS to implement their embiggened America. In the process, they're going to slow down the game clock and touch up "the existing system of roads and intersections, revisiting the placement of cities and crossroads" throughout the map.

Read our review for our verdict on American Truck Simulator at launch.