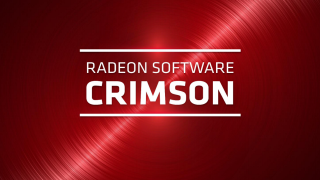 AMD’s Catalyst graphics software has been downloaded over a billion times since it first launched in 2002, but this year it’s being replaced by a shiny new model.

AMD says that its new software will basically be a “mini operating system” that will be faster and more intuitive. It will be called Radeon Software, and this year’s edition will be called Crimson. The current plan is to release a new edition annually, with each one named after a shade of red.

Radeon Settings replaces the Catalyst Control Center, and it will be running on the Qt framework rather than .NET. AMD says that Radeon Settings will load 10 times faster than its predecessor (0.6 seconds compared to 8), and it will have a more modern interface with better navigation. Meanwhile, AMD's game tracking service Gaming Evolved will still be bundled in as an optional download.

The Game Manager will auto detect all games running on your system and display them all on one screen for you. You’ll be able to create custom profiles for each one, or create a general profile for them all if you don’t want to tweak that much.

This concept of taking care of both the advanced and average users is carried over into the overclocking software, which again can be adjusted on a per game basis. A sliding grid is available to adjust the settings quickly, or you can go into more details with individual sliders if you wish.

You’ll also have several optimized video profiles to choose from, and if you’ve got multiple displays you can configure them all separately. Radeon Settings will be making Eyefinity (AMD’s multi-monitor integration product) easier to set up than before. You’ll be able to get it running in one click, but more options are available if you want to tweak some settings.

More information about Radeon Software Crimson Edition is to follow over the coming weeks. There’s currently not a firm release date, but AMD says that it will be out before the end of the year.