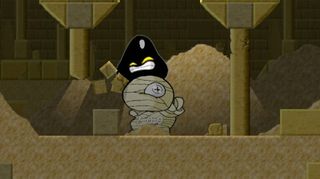 Gish is a sidescrolling platformer, released in 2004, about a sticky blob-type thing who sets off to rescue his girlfriend after she's kidnapped by a mysterious creature of darkness. It sounds weird but it's actually really good—good enough to warrant inclusion in the first-ever Humble Bundle, all the way back in 2010. And more than 15 years after release, it's also getting a new update.

Gish is getting a 15 year ani. update (quality of life stuff and some bonus levels) next month. @noclipvideo is also working on something neat for it and @LimitedRunGames also has something Gishy in the works as well ;)December 17, 2019

News of the quality-of-life update came amidst a series of tweets from Gish co-creator Edmund McMillan, who has big plans for 2020. McMillan's most recent game, The Legend of Bum-Bo, will also be getting some "fun updates" next year, including "saving/loading, quality of life polish, bonus content and more fixes," and he hopes to start revealing more about The Binding of Isaac's final expansion, Repentance, ahead of its planned release in mid-2020. "@FixItVinh and the team are doing a mind blowing job on it and it will be well worth the wait, trust me," he wrote.

McMillan also said that the on-again, off-again Mew-genics will be back in development next month. This is interesting because I didn't realize that development had been paused (again): It's been put on hold multiple times over the past several years but the last we heard from it was in June, when McMillen announced that it was "officially back in development."

Maybe this new tweet is a recommitment rather than a resumption? Whatever the case, it's good news if you've been looking forward to someday actually seeing what Mew-genics is all about.

He also teased a "small secret game about worms" that he expects will be out in February or March, and a possibly-final expansion to The Binding of Isaac: Four Souls, a tabletop card game, that will arrive around the end of 2020. He had some bad news for fans hoping that Four Souls will be brought to the digital realm, saying in a tweet today that a videogame version is "probably not" going to happen.