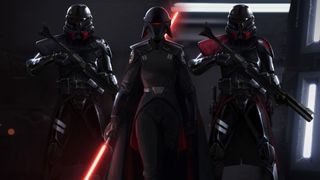 Star Wars Jedi: Fallen Order is coming on November 15, and with that date now less than two months away, it's getting about time to crank up the hype machine. Those gears will begin to turn on September 26—that's tomorrow—with the rollout of a brand-new trailer for the game during the Triple Force Friday Global Reveal.

Force Friday, as explained on Wookiepedia, is a Star Wars "merchandising event" held annually in September (except for 2018, for some reason) to announce and promote toys, action figures, novels, movies, and—this year—videogames. The 2019 event is a "Triple Force Friday" because along with Fallen Order, it's also going to feature merchandise from The Rise of Skywalker movie and The Mandalorian television series.

"The next generation of Star Wars products" will be revealed beginning at 11 am PT/2 pm ET on September 26, and will be livestreamed on YouTube, Twitch, and Mixer.