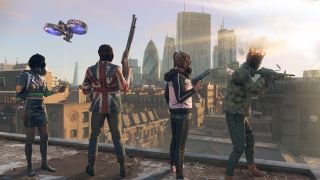 London seems like a good fit for Watch Dogs Legion's dystopian vision of the near future, especially now, when the whole country is divided, angry and exhausted. But it turns out that, while Brexit might have informed some of the story or decisions Ubisoft made about the game, the choice of location was made before Brexit was all we could talk about.

Watch Dogs Legion is set in a post-Brexit (it's like the post-apocalypse but not as nice) London that's in the grip of a malevolent private security company, which was ostensibly invited to the city to help it deal with riots and bombings. It's not clear if the riots and bombings were Brexit related, but certainly the themes of division are.

Brexit is a symptom of something that's been simmering away for years, however, and it wasn't the reason why Ubisoft brought Watch Dogs across the Atlantic to Blighty.

“We chose London as a setting before the Brexit debate was even happening,” Watch Dogs Legion creative director Clint Hocking told PCGamesN, “and certainly before the vote”.

Surveillance and tyranny are two things Watch Dogs has been very interested in exploring, which immediately makes the UK, and London in particular, the perfect spot. Before Brexit started cocking everything up, things were already a little bleak. Surveillance has been a concern seemingly forever, there was the financial crisis, the Tories swooped in, we got austerity, we got food banks—it's been grim for years.

The only thing we've seen that doesn't fit (aside from Ubisoft's interesting take on London accents) is all the bloody guns. I can suspend my disbelief pretty easily, but the UK could devolve into a Fallout-style apocalypse and we'd still probably leave guns out of the equation. It's 2050, we're all cannibals now, but guns are still mostly prohibited and if you're feeling a bit under the weather you can still make an appointment with the NHS. So, yeah, it's weird. It's a very American take from a French-Canadian developer and a French publisher. The good news is that half of the weapons are non-lethal.