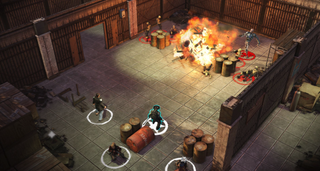 As part of GOG's Winter Sale, Wasteland 2 is available to download and play for free, but be quick because the offer is only around for 48 hours. This free edition of Wasteland 2 is the Director's Cut Digital Classic Edition that includes the original Wasteland that was first released in 1988.

Wasteland 2 is a post-apocalyptic RPG where you and your ragtag recruits band together to create a group called the Desert Rangers. After one of your group gets brutally murdered, you need to pick up the investigation where they left off, fighting huge robots and exploring the wastes of post-nuke Arizona. In our review for Wasteland 2, Cory gave it an 83 giving it's writing and RPG elements high praises.

This is the perfect opportunity to get into the Wasteland games, with Wasteland 3 releasing early next year. Wasteland 3 ran a successful crowdfunding campaign and the developers, inXile, raised more than $3 million. A new trailer and game footage was shown at E3 2019 so check out everything we know about Wasteland 3 to feast your eyes on what's new in the series.

This giveaway ends December 12 so make sure you head on over to GOG.com to download it.