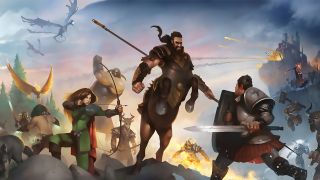 Amazon's New World is one of the most anticipated MMOs in recent memory, and in part I think that's because it hasn't been extensively documented in backer updates and years long alpha tests. The lack of a crowdfunding campaign (which Amazon obviously didn't need) lends it more mystery than competitors such as Crowfall, which was Kickstarted in 2015 and has been in various stages of pre-alpha testing for the past five years.

But if gangs of fantasy settlers building and defending forts interests you, Crowfall is worth your attention. On top of its millions in crowdfunding support, the game has recently drawn another $11.7 million from investors to support its final push into release. That'll start soon with a beta, which will be open to all backers, as well as non-backers who will be invited in waves (you can register on the official site).

There are a few oddities that distinguish Crowfall from other MMOs. Like in EVE Online, there's passive skill training, but it takes place at the account level—all of your characters will benefit from the offline combat, crafting, or exploration training you select. That's in addition to character-level training.

More notably, outside of the metaworld—which includes a personal plot of land to build on, PvE area God's Reach, and PvP 'Infected' areas—Crowfall is played in campaigns which take place on unique maps and have definitive endings and winners. In a campaign, you'll join one of three factions, import items from the account level (you can also export items from campaigns, but moving items either direction costs you), and battle for territory. At the end of an in-game year, a winning side is determined, and your character walks away with whatever spoils of war you've earned—back to the persistent worlds to prepare for the next campaign.

The very long FAQ explains everything in more detail, but the basic idea is that Crowfall seeks to marry the persistence of MMOs with win-or-lose strategy campaigns, so that factions aren't simply taking, relinquishing, and retaking the same forts for eternity.

Over 300,000 players have signed up to participate in the Crowfall beta, according to studio co-founder and president Gordon Walton (who we spoke to about the future of RPGs back in 2016). It's free to sign up, though to guarantee access now and in the future, backer packs start at $50.

It's exciting to have two MMOs coming at the same problem—how to design a sandbox for big, fantasy territory wars—in different ways in the same year. New World feels like a more straightforward mix of survival game and MMO staples, and Crowfall has a hurdle ahead in explaining what it is and why its multi-layered structure is worth the many hours of commitment it surely demands.

Maybe the beta will help with that, especially if players come away with some brilliant stories—that's been one way EVE Online has attracted its victims. The Crowfall beta is expected to begin within the first quarter of this year, and the full release is planned for sometime later in 2020.