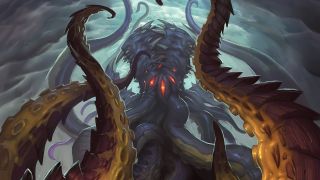 The final update to World of Warcraft: Battle for Azeroth launched just last week, bringing to an end one of the more contentious expansions in WoW history. But the true ending wasn't discovered until last night, when the new 12-boss raid, called 'Ny'alotha, The Waking City', opened for business. Thousands of players across every server rushed in to clear it and defeat the final boss in hopes of getting powerful loot and seeing the cutscenes that traditionally provide closure to the story while often teeing up the next major conflict.

But like everything with Battle for Azeroth, the end to its latest raid—and by extension its whole story—is a bit of a whiff, and players aren't happy about it. Over on WoW's subreddit, several of the most popular threads are angry rants from players exasperated by how anticlimactically the fight with N'Zoth ends. "Is the ending cinematic an out-of-season April Fool's joke?" one player writes.

"I couldn't have possibly prepared for how bad that was," says another.

Unless you've been paying attention to World of Warcraft over the past two years, it's not easy to understand what's happening or why. The gist is that, despite its initial premise of an all-out war between the Horde and the Alliance, Battle for Azeroth once again saw both factions setting aside their differences to fight an existential cosmic threat. Surprised? You shouldn't be. It's a story beat Warcraft has recycled again and again.

This time was a little different because the world-ending threat was the enigmatic Old God N'Zoth. This Lovecraftian villain has been a background character in Warcraft lore for over 15 years, but events in Battle for Azeroth finally saw him freed from his aquatic prison and unleashed upon the world. In the latest update, Visions of N'Zoth, players fight against metaphysical horrific visions of a future where Azeroth is overcome by eldritch horrors and N'Zoth's Black Empire is made manifest. It's Cthulhu by way of Disney, but Visions of N'Zoth is thematically one of the strongest updates to Warcraft in years and introduces a ton of exciting challenges and world-shaping events.

Each week, two different zones rotate between being overrun with N'Zoth's corrupting influence. In the deserts of Uldum, for example, gnarly tentacles and bloodshot eyeballs sprout from ancient pyramids, festering boils cover the land, and otherworldly worms fly through a darkened sky. It's badass.

To save Azeroth and stop N'Zoth's vision from becoming reality, players embark on an epic quest that tours them through several old raids and dungeons as they discover an ancient network of devices that could potentially purge N'Zoth from Azeroth. But in order to get a clean shot, players have to venture into Ny'alotha, N'Zoth's seat of power.

It's an exciting setup for one of Warcraft's most anticipated villains. More keen lore fiends will have been waiting years for this battle, but Blizzard has been teasing N'Zoth since the previous expansion and players had their hopes set on an epic showdown with lasting consequences.

That's not what happens.

After braving the 11 bosses of Ny'alotha, players face off against N'Zoth himself. It's a grueling fight where the group has to maintain their sanity in the face of N'Zoth's dreadful power. Those who survive and manage to reduce N'Zoth's HP to zero are then treated to an in-game cutscene—and expectations for what would happen next were undoubtedly high.

Even though players have technically already beaten N'Zoth, the cutscene above shows his corruption taking hold of the player's character as he rattles off typical villain one-liners. Just as all hope seems lost for the player, Magni Bronzebeard (the dwarf made of diamonds) says some pseudo-inspirational mumbo jumbo and the player starts glowing and floating. This somehow gives the ancient weapon you've been unearthing what it needs to fire at N'Zoth, which is exactly what happens. A giant laser beam hits the Old God, he evaporates, and... the battle for Azeroth is over. N'Zoth's corruption over Azeroth fades, the player returns to Magni, who praises their efforts, and that's it.

Players are understandably pissed. In the 24 hours since raid groups started clearing Ny'alotha, the WoW subreddit and official forums have filled with threads and memes of players frustrated and confused by how quickly one of Warcraft's most beloved villains is destroyed. Over on YouTube, the official World of Warcraft channel has unlisted its video of the cutscene, presumably due to the over 10,000 dislikes and negative comments. Even some of WoW's bigger YouTubers and Twitch streamers are strongly expressing their disappointment.

And it's easy to see why when you compare N'Zoth's defeat to other end-of-expansion cinematics. In Legion's last raid players who defeated Sargeras, Warcraft's chief villain since the RTS games, were treated to an epic cutscene where Sargeras plunged his continent-sized sword into Azeroth as a final, desperate attack. That sword then became a permanent fixture in the world that players could go see close up and, in turn, set in motion the story of Battle for Azeroth.

But N'Zoth, who is easily just as big of a threat (and just as renowned by Warcraft fans), rolls over and dies without any real consequence. It's a cheap and underwhelming end to one of Warcraft's coolest villains, and it highlights just how uneven and ham-fisted Battle for Azeroth's storytelling is—and how so many narrative threads are still left dangling. After all, Sargeras' sword is still sticking out of Azeroth and presumably poisoning it, Sylvanas is still at large, and chief characters like Jaina Proudmoore and Princess Telanji feel like they've faded into the background. Nothing feels resolved. Instead of focusing on the already too complicated pieces of Battle for Azeroth's core Horde versus Alliance story, Blizzard squanders one of its most cherished villains as a quick deus ex to end the war and unite both sides.

"It feels to me like the devs didn't know which direction should they take with this [expansion]," writes one player. "There were various themes and ideas, most of them half-baked or just not satisfying at all."

"There are times I want to actually read the lore, but Blizzard does a damn good job of convincing me to not bother," says another. "Imagine building a villain up for 15 years for it to go poof so easily."

Some players are clinging to the idea that Ny'alotha's Mythic-difficulty version, which isn't available until January 28, will have an expanded cutscene that gives more context. But while Mythic versions of raids often have hidden boss mechanics, there isn't much precedent for them having their own special cutscenes—not ones that add clarity to the story, anyway.

Unless Blizzard has a secret mini-patch planned or something else that'll recontextualize the ending, it seems players are stuck with this underwhelming finale. It's a shame, too, because I'm really enjoying this patch. The initial quest is a fun romp through parts of Azeroth I had long forgotten, and the new features like Horrific Visions and Corrupted Gear are satisfying to experiment with. And though I had hoped that this final update would end Battle for Azeroth on a high note, it feels like this expansion will go down as one of Warcraft's worst.

Oh well, maybe Shadowlands will fair better when it launches this summer.