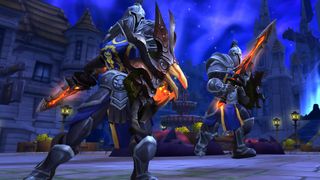 The final major update to World of Warcraft's Battle for Azeroth expansion launches tomorrow, bringing us into the endgame of Warcraft's most controversial expansions to date. But despite all the troubles that plagued the first year of Battle for Azeroth—the unrewarding grind, the boring gear system, the lack of things to do at endgame—Blizzard is poised to end things with a bang.

Called Visions of N'Zoth, Update 8.3 pits players against the eldritch god N'Zoth, now freed from his prison and ready to raise hell across Azeroth. For WoW veterans, it's an all-too-familiar situation: an all-out siege by a seemingly unstoppable army commanded by an unfathomably evil villain. But Visions of N'Zoth isn't just more of the same, it gambles big on some new features that will, hopefully, end Battle for Azeroth on a high note.

"One of the fun things about working on a patch like Visions of N'Zoth is that we're pretty far along in the expansion pack cycle for Battle for Azeroth, so a lot of the elements have been figured out," says senior game designer Jeremy Feasel. "And that sort of gives you this nice, high-level view of where you can plug in some additional new and crazy stuff, and really turn some ideas on their head. It lets us do a lot of fun experimenting."

The future is horrifying

With Old God N'Zoth freed, he's looking to cement his Black Empire as the dominant force on Azeroth. To accomplish that, though, N'Zoth needs to break into two ancient titan facilities located in Uldum and Vale of Eternal Blossoms. Similar to Legion and Faction Assaults from previous updates, Black Empire Assaults transform entire zones into battlegrounds as they are overrun with N'Zoth's minions. Instead of being available temporarily through the week, though, Black Empire Assaults will always be active in both Uldum and Vale of Eternal Blossoms, with N'Zoth focusing the brunt of his assault on one zone each week.

When a zone is the primary target of an assault, it's whole appearance will change to reflect N'Zoth's spreading corruption. Tentacles will sprout out of the ground, giant flying worms will circle the sky, killing players that get too close or coating them with nasty spit that greatly reduces their flight speed. Meanwhile, new quests, rare monsters, and hidden puzzles will sprout up all across the zone for players to find and beat.

Though it bears a resemblance to previous iterations of Assaults, Feasel says this time the team was inspired by Mechagon's open-ended zone design, with an emphasis on exploration instead of blitzing through a series of quests before moving onto something more interesting. "We've got this big bucket with a variety of different pieces of content there," Feasel explains. "You're rarely going to see exactly the same thing on a week by week basis as this allowed us to create a nice big sandbox to go explore."

Staving off N'Zoth's weekly assaults is just the beginning of the war against the Black Empire, though. To fully understand his plan so that he can be defeated, players will need to physically venture into N'Zoth's vision of Azeroth's future—a horrific apocalypse where N'Zoth's corruption and eldritch monsters have wiped out all life in Azeroth. Using resources earned from Black Empire Assaults, players will be able to enter these Horrific Visions a few times a week. Each foray into this grim potential future will taunt you with valuable rewards, but if you get too greedy you can lose everything and have to start over.

As Feasel explains, Horrific Visions are a new type of activity that's available for both solo players or a group of five, no matter what role they're playing. Each week players will rotate through exploring the corrupted ruins of capital cities Stormwind and Orgrimmar, fighting the monsters that live there and finding rare resources that feed into a few separate progression systems. "This is an evil and dark version of these cities," Feasel says, adding that a great amount of detail went into environmental storytelling that'll explain "what would go wrong if N'Zoth's insanity took over the world."

"What happened to the children in the [Stormwind] orphanage," Feasel speculates, "or other characters in these zones? We went all out [exploring that idea]."

Horrific Visions are similar to a regular dungeon but with some pretty wild twists. True to the eldritch inspiration, a sanity meter ticks down each second you spend inside of one of these dungeons, with the rate increasing in areas off the main path. Monsters you encounter in these apocalyptic visions can also drain your sanity and when it depletes you're kicked out and lose any rewards you found. The goal, then, is to juggle your greed and the dangers of the enemies you might face while still leaving enough time to beat a hasty retreat.

What's cool, though, is that players will get to choose just how difficult Horrific Visions can be based on where they explore. Feasel says the first area is relatively easy, with a simple objective standing between you and victory. The real challenge comes from side areas, each with their own objectives and bosses of varying difficulty but rewards to match. Do you play it safe and stick to the main path or venture into dangerous territory hoping to get better rewards but risk losing everything?

"We also have an extended endgame of difficulty called Faceless Masks," Feasel says, "where you can take on between one and five additional difficulty multipliers, and that gives you quite a variety of different things to fight through over the course of the expansion pack." It's like Warcraft's version of Halo 3's beloved Skulls.

I also like how Horrific Visions is so clearly inspired by different modes Blizzard has experimented with in the past. Game director Ion Hazzikostas originally likened it to Legion's infamous Mage Tower due it its long-term challenge, but there's also a lot of shared DNA with the Withered Army Training scenario, which tasked players with exploring a large dungeon full of optional areas and enticing rewards to match.

These new features also compliment new progression paths that address problems players had with Battle for Azeroth during its first year. Though Battle for Azeroth's main campaign was a lot of fun, its endgame was soured by a shallow, infinite grind coupled with a boring armor system that didn't offer much in the way of meaningful customization.

Visions of N'Zoth, however, overloads players with choices in how best to tailor their character. A new legendary cloak, for example, can be empowered using resources found within Horrific Visions. And players who hate Titanforging—the system that would randomly boost the overall power of a piece of gear—will be happy to see it replaced entirely. Now, players have a chance to find Corrupted gear, which offers more powerful rewards but has nasty side effects, like being randomly attacked by interdimensional monsters, if you wear too many pieces. It's up to you if the extra power is worth the potential risk, as Corrupted gear can be cleansed, making it a normal piece of armor. Combined with changes made in the previous patch, World of Warcraft is beginning to feel like a proper RPG again.

"We throw a lot of these awesome overlapping systems at you just bam, bam, bam," Feasel laughs. "You're gonna feel like your character grows in both in power and in gameplay. But N'Zoth is also assaulting these zones, so there's a lot of things to also throw your character against. You're going to find that they're pretty powerful creatures out there, so even though you've got all this power, you can able to challenge yourself as well."

Of course, the real challenge is going to be the new 12-boss raid—the biggest raid in World of Warcraft since Hellfire Citadel over four years ago. Here, players will use their new Legendary cloak, and powerful Corrupted gear to enter Ny'alotha, the Waking City and take the fight directly to N'Zoth himself, though no one knows what will happen once he's (presumably) defeated or how that will tie into the events of Shadowlands when it releases later this summer.

It'd take another hour to go through the full list of things coming in Visions of N'Zoth, but fortunately Wowhead has a great guide you can read to learn about the new Allied Races, pet dungeon, PVP changes, and more. But as someone that's fallen away from World of Warcraft over the past year, Visions of N'Zoth is exactly the right kind of update to rope me back in. I like the smart iterations on familiar systems, like Assaults, but I especially love that Blizzard still finds ways to take risks with major updates, gambling on experimental new features like Horrific Visions.

This is the catch-22 of Blizzard's approach over these past few years. When these experiments misfire, they sometimes result in a frustrating mess. But when Blizzard hits that sweet spot, it shows exactly why World of Warcraft is still worth playing despite being almost old enough to have a driver's license. In the case of Battle for Azeroth, I'm not sure Visions of N'Zoth will do much to assuage players convinced this entire expansion is a failure, but it's exciting to see Blizzard turn things around and end on what promises to be a high note. "I feel like we learned a lot and I felt like we acted on a lot of it," Feasel says. "And that let us come up with this awesome package that also allowed us to try out some crazy ideas and systems. It gives us a lot of ground in order to move forward on as we're working into Shadowlands."