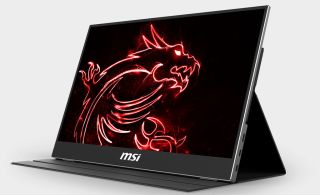 MSI managed to earn a CES innovation award for a portable gaming monitor with a 240Hz refresh rate, which we wrote about a few weeks ago. It's now available, but with a much lower refresh rate—it's listed at 60Hz instead of 240Hz. So, what's going on?

The Optix MAG161V now available is a precursor to faster versions that will debut sometime later. Even though the MAG161V's product page for the MAG161V prominently displays the same award badge as the MAG161 (no "V" at the end) that was touted in MSI's award announcement, it's a different monitor—I'm told MSI will release two more models, one with a 240Hz refresh rate and one with a 120Hz refresh rate.

This portable display consists of a 15.6-inch IPS panel situated on a kickstand, similar to a Microsoft Surface tablet, minus the keyboard and other hardware. It has a 1920x1080 resolution, 178-degree viewing angles (vertical and horizontal), 180 nits brightness, and a 700:1 contrast ratio (the global product page lists it at 800:1, but MSI tells me that's incorrect, and that the US product page is accurate).

None of MSI's product pages or datasheets list the response time, but on Newegg, it shows as being 25ms (gray-to-gray). That seems awfully high, even on an IPS screen, yet it's accurate—I confirmed it with MSI directly.

"The future models may not be entirely the same as the 60Hz [model], we are looking to improve the overall build quality and features on the other models," MSI told me.

Fair enough. Also, dropping to 60Hz is not necessarily a deal killer, if this is to be used as a secondary monitor for chat and other things that wouldn't benefit from a fast refresh rate. Maybe it would work well with Stadia.

For anyone who might have purchased a laptop with a lower refresh rate and was looking forward to a portable 240Hz display for gaming (one of the niche markets for something like this), the 60Hz refresh rate is certainly disappointing. But, it's not the end of the road—240Hz and 120Hz variants are coming.