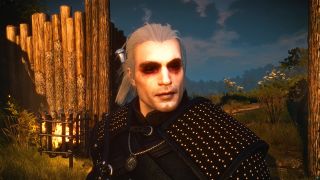 James Davenport is one of many to go back to The Witcher 3 in the wake of the Netflix series, only in his case he's been inspired to make the game more like the show by testing out various mods that make Geralt look more like Henry Cavill. By the end of his journey he's got a witcher that does look pretty Cavillicious.

Jeremy Peel went on a journey too. He's traveling across the USA in American Truck Simulator in an attempt to emulate all the foot travel in Death Stranding, since it's not out on PC yet: Beginning in Roswell, New Mexico, and driving from UFO Country to San Francisco while trying not to rack up thousands of dollars in fines.

Tyler Wilde has been playing Project Winter, a cross between a survival sim and one of those werewolf/mafia/paranoia-style social games of betrayal and secrecy. He's pretty into it, though you need a full group of eight players to make it really work.

I've been catching up on a few smaller games, including Donut County. You slide a hole across the ground like something out of a Roadrunner cartoon, trying to get objects and characters to fall into it. The hole gets bigger the more stuff falls down it, like the ball of trash in Katamari games, and there's some puzzling involved to get certain objects. There's also a Trashopedia, which describes everything you've collected and has some of the funniest "item description" writing I've ever seen.

The rest of the team have catalogued the first game they played in 2020. What have you caught up with this week? Are you one of the many playing The Witcher 3, or are you trying the Darksiders games after grabbing them from Epic? Let us know!