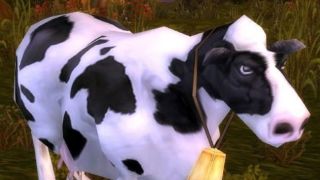 Find all previous editions of the PCG Q&A here. Some highlights:
- Which keys do you always rebind?
- Do you play tabletop RPGs?
- Do you turn your PC off at night?

Videogame Easter eggs were popularized when programmer Warren Robinett responded to Atari's refusal to credit game developers by hiding the words ""Created by Warren Robinett" in Adventure. But even before that, text adventures included hidden commands and arcade cabinets hid secrets that could only be discovered by triggering certain input sequences.

These days Easter eggs are much more likely to be silly jokes or references than developer credits, but the tradition continues in everything from Diablo cow levels to the Ghost of Mount Gordo in GTA 5. What are your favorite videogame Easter eggs? Here are some of ours, add yours in the comments.

You can find my favorite Easter Egg in The Sims 3 Into the Future expansion pack. If you use the all-in-one bathroom, which is basically a futuristic outhouse, you'll find three seashells, a reference to a specific scene from the movie Demolition Man. John Spartan (Sylvester Stallone) gets teased by a fellow police officer for not knowing how to use the three seashells in the bathroom. There's no toilet paper in the year 2032 for whatever reason, but Spartan doesn't know that because he's just been thawed out from cryogenic stasis, where he's been for the last 40 years. He improvises though, in the most John Spartan way.

The movie doesn't tell us how the three seashell thing works, and neither does The Sims 3 Into the Future, but this is still my favorite Easter Egg because it's a reference to one of my all-time favorite, super cheesy sci-fi films. Deus Ex: Mankind Divided also has a reference to the same thing, but the ones in The Sims 3 are much harder to spot.

I'm especially particular to a melancholy Easter egg, so the one that springs to mind for me is my other half discovering a very dead Tyrion Lannister in The Witcher 3. His body is found on an island off Skellige, perched in a 'Sky Cell' similar to the one he was imprisoned in during season one's visit to The Eyrie. As with all good pop culture Easter eggs, it doesn't make sense, it's just a cute (for a corpse) reference to whatever the devs were into at the time. Part of the fun was that it didn't seem to have been mentioned anywhere, so there was a kick of being the first one to find something. Even if that thing was a small dead definitely not Dinklage.

When you begin playing Metal Gear Solid 5, you're required to enter your birthday. That pays off big if you happen to play the game on your birthday (or whatever date you entered) because the gang throws a little surprise birthday party for Snake on Mother Base, giving us a chance to see Snake's awkward, uncomfortable smile and watch him blow out the candles on his cake. It's actually quite a sweet and touching moment.

Morgan Park: The Outsider in Wolfenstein

This Easter egg might be very recent, but it made me smile so big that I know it'll stick with me for a long time. About two-thirds through Wolfenstein: Youngblood, you'll find the Dieselwerk weapon that can blow open previously locked doors. If you head back to one of the earlier areas, you can access a mysterious room that is one big shrine to The Outsider from Dishonored. Placed on the classic occult table is a rune, the upgrade currency from Dishonored, that you can actually collect. Throughout Youngblood, I could feel the Arkane influence in its exploration and platforming  (they're a co-developer on the game), but it was great to see a true homage to the stealth series that I hope comes back someday. And if this suggests that Wolfenstein and Dishonored take place in the same universe, I'm not complaining.

Hidden in a dark corner of Dusk is a picture of "Wife of Intoxigator" that looks like something a young child would draw to be hung on a fridge. Because that's what it is. A young lad named Caleb liked Dusk so much, and in particular the Intoxigator and Son of Intoxigator bosses, that he created the "concept art" to complete the acid-spitting alligator family. Caleb's mother sent it to publisher New Blood Interactive and they were so impressed they included it in the game, exactly as-is—eraser marks and all—with "Thanks Caleb!" pop-up text.

I'm always fascinated and kind of disturbed by how many Easter eggs are the dead bodies of rival videogame characters, sometimes even ones from the same studio like the hanging Commander Keen corpses on Doom. In The Witcher 2 you can find Altair from Assassin's Creed dead in a broken hay cart, clearly having attempted a leap of faith in a game with a slightly more down-to-earth interpretation of physics. Sometimes they're not even videogame characters, like the skeleton of Indiana Jones in a fridge that didn't turn out to be nuke-proof in Fallout: New Vegas, or the bones of Luke Skywalker hanging from the frozen ceiling of a troll cave in Skyrim. I don't know why, but I do enjoy finding some gruesome remains and going, "Oh hey, I know that guy!"