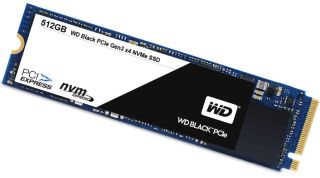 After being largely absent from the consumer solid state drive market since its inception, Western Digital decided to assert itself into the category three months ago with its WD Blue and WD Green drives, the company's first branded client SSDs. Now it's making a run at the performance sector with its new WD Black SSDs.

The WD Black drives are the company's first PCIe SSDs for consumers. They're another option in the fast growing market of gumstick-sized (M.2 2280 form factor) NVMe drives that tap into the PCIe Gen3 x4 bus for faster performance than what SATA 6Gbps SSDs can deliver.

"NVMe PCIe-based SSD adoption is poised to accelerate in 2017 and the years to follow," said Jeff Janukowicz, vice president, IDC. "Products like the WD Black PCIe SSD, with a broad ecosystem and compatibility testing, should give customers a significant performance increase over SATA SSDs and offer a straightforward solution for customers to update to or build future-ready systems."

The WD Black line comes in 256GB and 512GB capacities. Both drives offer similar speeds, though the larger capacity model is slightly faster. Here's a look at the specs: