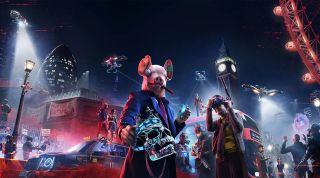 Watch Dogs Legion, the third in the Watch Dogs series, will take place in the dystopian near-future. As with previous Watch Dogs games set in Chicago and San Francisco, Legion will be set in the fictional version of a major city. This time around, we're headed across the pond to London in order to, as creative director Clint Hocking told Famitsu, approach problems in other parts of the world. London after Brexit, that is, so not too fictional nor too futuristic.

Unlike previous Watch Dogs games, Legion brings a neat twist: Every character in the game is a potential protagonist for you to recruit to your cause. Each comes with their own traits and skills that you can use before hopping into another member of your budding resistance movement.

Ubi shared a solid chunk of gameplay during its press conference to show off how different types of characters can be recruited and operate. We also went hands-on with Watch Dogs Legion and came away massively impressed. Below is everything else you need to know about Watch Dogs Legion ahead of its (now delayed) launch.

Watch Dogs Legion has been delayed to an unknown time in 2020 or 2021, according to Ubisoft CEO Yves Guillemot during a financial call in late 2019 as reported by MarketScreener. We were quite impressed with Watch Dogs Legion during our hands on sessions around E3 2019, so it may stand to reason that Watch Dogs will be the least delayed of the bunch (Ubisoft announced delays for other games during the same call). Watch Dogs Legion's originally planned release date was March 6, 2020.

Apparently Ghost Recon Breakpoint's poor reception has Ubisoft reconsidering the level of polish needed for launch. Guillemot said that Ubisoft wants to ensure the "gameplay innovations" for each of its games "need to be perfectly implemented in order to offer an optimal experience."

Real-life London is already known for its heavy use of surveillance technology. Watch Dogs Legion's post-Brexit London is a whole new level of tech dystopia. Drones are now heavily integrated into society, some of which are basically flying cops, equipped with weapons and scanning for troublemakers at all times. A new private security company, Albion, has gained influence across the city. Blume, the evil tech super company from the last two games, still appears to be pulling the strings behind the scenes.

It turns out that, while Brexit might have informed some of the story or decisions Ubisoft made about the game, the choice of location was made before Brexit was all we could talk about. Before Brexit, things were already a little bleak. Surveillance has been a concern seemingly forever.

"We chose London as a setting before the Brexit debate was even happening," Watch Dogs Legion creative director Clint Hocking told PCGamesN, "and certainly before the vote."

In what may or may not be another prescient design decision, Scotland is independent from the UK in Legion's timeline.

That's a big claim, but Watch Dogs Legion is an ambitious game. There is no one protagonist in Legion. Cutscenes, story beats, and dialogue will all change depending on the DedSec member you're currently playing as. Each character has a host of different attributes that affect their playstyle. Scanning a random citizen might reveal that their background makes them better at non-lethal takedowns or hacking drones. But you can't just hit a button and recruit them right away—you have to sway them to your side, convince them DedSec is worth risking their life for.

Samuel went hands-on with Watch Dogs Legion and came away impressed with how deep the recruitment system goes. "I recruited a person, watched her liberate Camden Market from goons (and put Abe Welch in the hospital), then saw her get double crossed and shot dead in front of a massive security force. I was a little bit attached. The game's big idea is working."

NPCs aren't only a set of stats, though. For instance, killing a man on the street will cause his family to resent DedSec, which affects your chances of recruiting them. In Samuel's hands-on, he accidentally put a man in the hospital, hacked the hospital to pay for his treatment, and then ingratiated them to DedSec's cause.

A person's stats are influenced by their backstory. For instance, someone who has been injured by Albion soldiers in the past might have a damage buff against them. Someone who creates 3D printed art forgeries gets a discount when using the in-game 3D printer to make new weapons. Some are more a little wackier, like the Derek Adyebo NPC seen in the demo, who is "addicted to adrenaline." He deals 100 percent extra damage, but "may die randomly." Jeez.

The trailer above from Gamescom 2019 goes over some of these same points, including another character that might die randomly. Here's hoping fewer Londoners bearing that special perk show up in the game than in Legion's marketing.

What a lovely hat!

One detail we did get a better look at in the Gamescom trailer is the ability to customize DedSec recruits with different gear and clothes. There are some more obvious choices: sneakers, shirts, and masks. And then there's the twat box.

There are three classes for DedSec agents: Enforcer, Infiltrator, and Hacker

Ubisoft art director Josh Cook and lead game designer Mathieu Berube played through about 30 minutes of Watch Dogs Legion at E3, as you can see in the video below, posted by UbiCentral. The video shows off the three classes for DedSec recruits, which we've included details on below.

After recruiting a new citizen to join DedSec, you can assign them one of three classes: Enforcer, Infiltrator, and Hacker. They can all perform the same basic combat and stealth, though as we saw with grandma Helen, physical attributes can effect their combat capability. As for what separates each class, it mostly comes down to extra perks:

Enforcers are the combat-focused class. They can equip explosive rounds on their weapons and plant sticky mines.

Infiltrators are the hands-on stealthy type. They excel at general sneakiness, have more melee options, and come with an especially useful ability. They can activate an "AR cloak" that essentially renders you invisible to guards for a short time. Ubisoft is explaining this bit of witchcraft by tapping into the neural implants that all London citizens have. You're hacking people's eyes, which isn't terrifying at all.

We see four perks available for the Infiltrator class in the gameplay demo above (more will be available in the full game, we're told): Lunge, which gives you an increased takedown radius, All-Seeing lets them tag nearby hostiles, Shockwave staggers enemies, and First Strike adds a suppressor to SMG weapons.

Hackers are also stealthy, but prefer to let drones do the sneaking for them. They have access to the spider drone (highlighted heavily in E3 footage) that combines the low profile of Watch Dogs 2's drones with a mounted turret that lets it fight back. It can even perform melee takedowns.

In some ways, the three classes divvy up the abilities that Aiden and Marcus from previous Watch Dogs games used to have all on their own. This will no-doubt give every DedSec member more of a unique identity and encourage players to try out different play styles.

Going full-on assault comes more risks than ever before. If your current DedSec operative dies, they're gone for good. Though, it seems like the game will give you ample opportunities to prevent that. This isn't confirmed, but by watching the demos, you can choose to be arrested the first time you go down. If you want to keep fighting you can get back up, but dying after that seems to be permanent.

So, you get once chance to give up without losing the operative you've powered hours of upgrading and emotional attachment into.

No other details were given for what this means, but its reminiscent of Watch Dogs 2's progression. Every mission was a single step towards completing a larger operation. Since there's no one protagonist in Legion, Ubisoft might be using this opportunity to tell five shorter stories instead of one larger one.

Ubisoft hasn't shared any details on Watch Dogs Legion's multiplayer, but it did describe the singleplayer experience as the "springboard" into multiplayer.

Despite Legion's E3 2019 demo presentation being full of guns and murder, Watch Dogs Legion will have more non-lethal options than ever before. According to Ubisoft, at least half of the game's weapons are non-lethal. That's a big step up from Watch Dogs 2, where your only choices were a stun gun and paintball rifle.

We got a glance at a few of those non-lethal options in Ubi's trailers and demo. The granny infiltrator Helen took out a baddie with a stun gun, and another trailer shows what looks like a stun shotgun. What we didn't see was the return of Marcus' neat DIY 8 ball melee tool.

But can you complete Watch Dogs Legion without killing anyone? Similar to Watch Dogs 2, there will be moments in Legion where the game expects you to end a life. You can still use non-lethal weapons to take them down, but it'll basically treat that scenario the same as killing them. It was a bit awkward in 2, but it at least didn't force you to shed blood.

Watch Dogs Legion has four available pre-order options with various digital and physical rewards to go along with the digital download PC version of the game. Although we don't recommend pre-ordering games, check out the mask with LED crown that comes in the Collector's Edition. If you're Dedsec deadest on ordering Legion early, you can do so on Ubisoft's website.