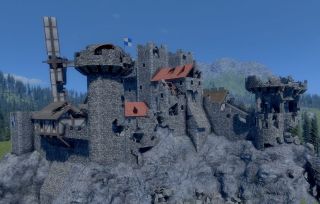 Medieval Engineers is a very niche sort of game. As its Steam Early Access page puts it, it's about "engineering, construction, and the maintenance of architectural works and mechanical equipment using medieval technology." It sounds a bit like Minecraft, but there's a much greater emphasis on the laws of physics and the need to design and build within those limitations. And when you don't, bad things happen.

It's all about structural integrity, especially when somebody starts flinging cannonballs at your fortifications. But developer Keen Software House says that while it can be played as an action game, "We expect players to avoid engaging in direct man-to-man combat and instead use their creativity and engineering skills to build war machines and fortifications. Medieval Engineers shouldn't be about troops; it should be about the machinery you build."

My experiences playing in real-world sandboxes as a child leads me to think that this might be an optimistic take on the situation—I like smashing them down a lot more than putting them up—but a game like this is clearly aimed at a very specific audience that might have a different attitude toward such things. And Keen Software House does have some idea what it's talking about: Its first game, Space Engineers, sold over a million copies in its first year of release, despite still being in Early Access itself.