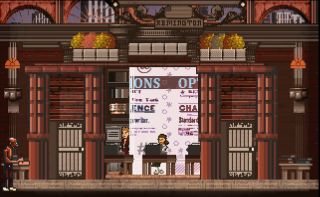 A Victorian typing game was not what I would have predicted as the next game from Cart Life developer Richard Hofmeier. Cart Life, which Hofmeier removed from Steam and made open source, is a minimalist simulation that charts the bleak lives of three street vendors trapped in poverty. It's quietly brutal, juxtaposing the mundane with a constant supply of tiny tragedies. Type Dreams is very much not like this at all.

Still in development, the current version of Type Dreams is a slightly wonky competitive typing game where you pick your typewriter, from Remington to IBM (perhaps dropped off by a time traveller), legendary typist and then compete with the AI in a test of speed.

You'll need something to type, obviously, and for that Hofmeier has enlisted the help of poets, comedians, novelists and journalists to create original writing, with more coming in the next release. The reward, then, is not just becoming the greatest typist in the world, but getting lots of original writing to read while you're making the ascent.

It looks like there's a story mode in the works, too, though you can't select it at the moment. Right now there's just the race, as well as lots of typists and typewriters to unlock by accomplishing specific achievements.

I've got a pretty loud keyboard, so it's rather satisfying, clacking away. I'm a bit rubbish, though. Precision's what I lack. Make a typo and you have to hit space and start the word again, costing precious time. And when the line is done, you've got to run your fingers across F1 to F12 to move the typebar. It's very tactile. And a bit fiddly.