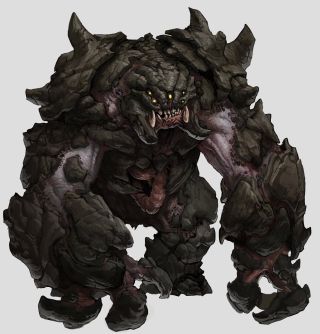 I'm not sure I buy it—"infinity plus one" and all that—but Turtle Rock is unequivocal, saying, "He was literally made as large as we could make him." It's also an incredibly powerful beast, with the ability to summon walls of rock to protect itself and isolate individual hunters, to hurl exploding blasts of magma, to smash scalding fissures into the terrain, and to grab distant players and drag them into melee range with its harpoon-like tongue.

The Behemoth has more armor and health than any other monster in the game, and as shown in the reveal trailer, it moves by "rolling across the landscape like a juggernaut." It's too big to jump, but it can climb, which might be its one weakness: Climbing is slow, and when you're slow, you're vulnerable.

The Behemoth will be released later this spring as part of the Monster Expansion Pack, which will sell separately for $15 but be free with pre-purchases of the game. Turtle Rock also revealed today the Evolve PC Monster Race [get it?] Edition, which includes everything in the Digital Deluxe edition—the game, the Behemoth, the Hunting Season pass [additional monster skins and four new Hunters], and three Magma Monster skins—plus two more Hunters, four timed-exclusive monster skins, and an unannounced fifth monster that's still in development. The package includes $131 worth of content, according to the studio, but will sell for $100.

Don't feel bad if you find yourself confused: I do this for a living and looking at the Evolve Digital Editions Breakdown makes my eyes cross. I'm also not terribly taken by this pre-purchase business, nor by Turtle Rock's attempt to spin it as a good thing for gamers. "We can’t drive this part home enough: If you are planning to buy the game, but are skittish about pre-purchase, don’t be," it wrote. "As soon as the clock strikes midnight on 2/10/15, the FREE Monster Expansion Pack bonus goes away and it will run you over $14.99 to buy Behemoth, the fourth Monster, and the Savage Goliath skin after the fact. Think of it as us buying the first round for you. As a thank you."

But to me it sounds less like a thank you, and more like, "If you don't buy this magazine, we'll kill this dog." 15 bucks for a single monster, even if he is the baddest boy on the block, is a pretty hefty price tag, and especially for a multiplayer-focused game: If you don't have the toys, you don't get to play, and what's the point of having an online game if you can't play with everyone?

Make of it what you will. Evolve comes out on February 10.