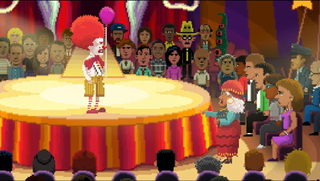 I'm particularly excited to set foot in Thimbleweed Park sometime in the first quarter of this year, a sentiment not exactly shared by one of the town's residents: a foul-mouthed clown by the name of Ransome. Ransome is a bitter entertainer in the vein of Krusty, or Psychoville's Mr. Jelly, and he looks to be a thoroughly entertaining character to play as during this old-fashioned point-and-click adventure.

Ransome's trailer comes hot on the heels of the over/under controversy, in which the game was criticised, quite rightly, for having its toilet rolls hung in a sinister underhand fashion. Creator Ron Gilbert eventually announced that the game would ship with an option allowing for overhanging toilet rolls, and all was well with the world. Well, no, not at all, but it made for a wonderfully silly bit of news anyway.