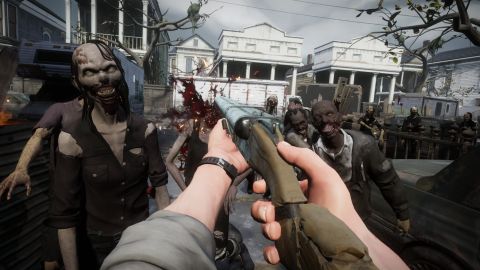 We all know how to kill a zombie in theory. It's easy, you just destroy the brain. A bullet will suffice, but guns are loud and zombies are attracted to noise. Ideally, you want to get in close and pierce the skull with a knife. Quick, clean, and silent.

Here's what's likely to happen the first time you kill a zombie in Saints and Sinners. You'll get in close, you'll stab with your knife, but it doesn't go in. The blade glances off, leaving a nasty but ineffective scalp wound. Skulls! Who knew they were so hard?

Now the zombie has grabbed hold of you. You start to panic, jabbing away at its face like you're trying to pin down an elusive pea on a plate. All the while, your stamina's ebbing away. When it runs out, it's chow time for Mister Flaky. Finally, you pull your arm so far back your shoulder creaks, and with a sickening squelch the blade drives through bone and brains, slathering your arm with blood.

Relief flows through you as the zombie goes limp. You pull the knife, but it doesn't come out. The blade sticks. Now you're panicking because your only weapon is wedged in this corpse's head.  Meanwhile, two more zombies are shambling eagerly toward you, one of which is wearing a helmet.

Saints and Sinners' nuanced simulation of knife/skull interaction is as remarkable as it is harrowing. Not only does it make each zombie encounter slightly unique (and also fraught with apprehension) it also effectively communicates your personal journey as a survivor in The Walking Dead's world. After the messy horror of that first kill, you'll be buzzing with nervous adrenaline, certain the odds are impossibly stacked against you. Over time, however, you'll learn how to efficiently dispatch the walkers, leading with your off-hand to keep them at bay, perfecting the arc of your swing and getting access to bigger, nastier melee weapons.

This one mechanic is probably enough to carry Saints and Sinners on its own. But it's only a small part of the most mechanically rich VR game I've played yet. Set in New Orleans, it sees you play as a nameless survivor known as "the Tourist" on the trail of a military bunker called the Reserve. From your contact trapped inside the reserve (a man named Casey) you know it's filled with all the resources a survivor could ever want. But the Reserve is also slowly filling with floodwater, while the key to access it is held by a vigilante who won't give it to you until you help her exact revenge upon the Tower, one of two local factions vying over the city.

From your base located inside a cemetery, each new day sees you venture out to a different district of the city to complete a specific objective, such as retrieving parts to fix a radio, or collecting "intel" from inside a faction base. At the same time, you also need to scavenge whatever resources you can from the environment, grabbing everything from broken guns to discarded shoes and bringing them home to craft new weapons and equipment.

Saints and Sinners builds its game upon solid VR foundations. Most interactions demonstrate the same care and attention as the melee combat. If you're injured, you'll need to wrap a bandage around your arm to restore health, while you can "disguise" yourself from the zombies by pulling out their guts and rubbing them on your clothes and skin as in the comic. Ranged weapons are also pleasingly represented, with authentic reloading mechanisms for revolvers, double-barrelled shotguns, and so forth.

What elevates Saints and Sinners above other VR games, however, is how these individual interactions are baked into a longer experience featuring both a decent story and, more importantly, overarching game systems. With each day that passes, the available supplies in the world dwindle, while the number of zombies shuffling around increases. This means crafting new equipment is not simply a way to empower yourself, but imperative for keeping up with the ever-growing threat.

This long-term issue exists in direct conflict with shorter-term dilemmas. When you're out in the world, you have roughly half-an-hour before the Tower rings every church bell in the city, causing the streets to swarm with zombies. You don't want to be around when this happens, so you can't be too picky about the resources you collect. When you get back to base, you'll then need to prioritise what upgrades to craft, whether it's a fancy new meat-cleaver, or home-cooked food that increases stamina without causing a health-reducing infection.

The result is a scintillating tension engine where every moment-to-moment decision you make matters. Although notionally a survival game, Saints and Sinners arguably has more in common with Dishonored. It's a game about blending stealth and combat in environments where the situation is always changing, about planning your actions and being surprised by the consequences. No matter how good your knife skills become, you're always playing with a knot of anxiety growing in your stomach, because there's so much you need to do, and so much that can go wrong while doing it.

There are set moral choices in the game too, such as choosing whether to help a Tower guard rescue his brother from another faction named the Reclaimed, or to kill the brother yourself and help the Reclaimed exact revenge upon the Tower. Yet while these choices impact the overall direction of the story, they're far more of an aside compared to Telltale's narrative adventure.

Beyond that, my complaints are mostly nit-picks. The crafting system could be a bit more involved. The guns, while perfectly fine, aren't as intuitive or satisfying as the melee weapons. The lack of a manual save system occasionally irritated me, although when you die you do get a chance to recover your lost loot.

That's about it. Saints and Sinners is a superb VR title, easily my favourite VR game since SUPERHOT. If you recently bought a VR headset in anticipation of Half-Life: Alyx, get it out of the box a month early and rig it up for this.