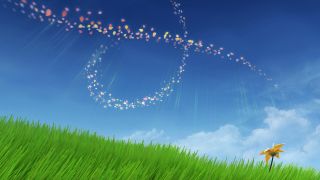 In a world gone mad, it's fine to occasionally slam your head into the sand and enjoy some videogames. The following are games I find myself turning to whenever life gets too intense. They're all wildly different, but have one thing in common: being extremely chill. So whether you want to live another life in 1980s Japan, slam galaxies together, or solve a gentle mystery, these are, for my money, the most relaxing games you can currently play on PC, regardless of whether you have one of the best gaming PCs, or a low-budget build. For the latest of 2019, see our best PC games and the new games of 2019.

There are some stressful, scary, and occasionally sad moments in Firewatch, but there are also hours of peaceful rambling to enjoy in its gorgeously stylised Wyoming wilderness. Exploring the woods as Henry, using your map and compass to navigate, chatting with Delilah, is so relaxing that I wish there was more of it in the game. For the most authentic, challenging hiking experience, disable the marker that shows you where you are on the map.

Despite being a martial arts revenge epic, the original Shenmue is deeply chill. It's the quiet moments where it shines: exploring 1980s Japan as teenager Ryo Hazuki, going to work, feeding a kitten, collecting capsule toys. The sleepy suburbs of Yokosuka make for an evocative setting and it's one of the nicest places on PC to just /exist/ in—especially when winter comes and the snow begins to fall. If I could live in any game setting, it'd be here.

Delightfully weird petal-'em-up Flower, which started life as a PlayStation 3 exclusive, is finally available on PC. In it you control the wind, blowing petals around and creating gorgeous swirling shapes that restore nature and colour back to a dead world as you go. Watching those grand, sweeping landscapes spring back to life as you blow across them is immensely satisfying, as is the sound of the breeze blowing through the swaying grass.

Read more Chillout games are having a moment

Hauling heavy cargo around grey, rain-soaked European motorways might not sound that relaxing, but it is. Honestly. The swish of the wipers going back and forth, and the mundane scenery gently rolling by, is hypnotic to the point where hours can suddenly disappear. And if you really want to escape into the, er, fantasy, stream a radio station from whichever country you happen to be in. When I play Euro Truck, I can feel my stress melting away.

In the dreamlike Abzû you swim gracefully through a series of colourful, psychedelic underwater worlds accompanied by an achingly beautiful score composed by Austin Wintory. The fluid, intuitive swimming controls, soaring music, and gentle pace make it a great game for zoning out. There's even a dedicated meditation mode which lets you sit back and soak in the watery world around you, including a huge variety of exotic sea life.

The Hunter: Call of the Wild

This is a game where you spend long periods of time slowly stalking animals through the wilderness, so it's a good thing its natural environments are so beautiful. The forests in particular are actually stunning, with dense foliage, natural lighting, and ambient sound design that really makes you feel like you're in the great outdoors. The hunting is fun, with a deep scoring system, but I often find myself ignoring it to just enjoy a peaceful walk in the woods.

Read more The Hunter: Call of the Wild review

Despite revolving around a series of gruesome murders, this Victorian detective adventure is a surprisingly chill way to spend a lazy Sunday afternoon. The pace is nicely sedate, the puzzles aren't too taxing, and it has the ambience of a cosy British crime drama. It also helps that it's one of the best detective games on PC, with actual dead ends and red herrings, and the possibility that the person you've sent to jail might not actually be guilty of the crime.

This interactive art installation stretches the concept of a 'game' very thin, but it's an incredible, atmospheric experience all the same. Mundane objects and settings appear before you in the form of minimalist, stylish dioramas, but slowly mutate into surreal, unpredictable dreamscapes. The artist behind Islands is Carl Burton, whose work outside of games includes the gorgeous animated vignettes he created for the second season of the Serial podcast.

This sedate, science-based simulator sees you exploring the surface of the Red Planet with a variety of realistic rovers and landers, and the the feeling of being alone on a distant planet is palpable. The quiet howl of the wind as you trundle through the dust creates an evocative atmosphere, and the steady pace of the rovers makes for a weirdly hypnotic game. The manned survival missions, inspired by The Martian, aren't quite as chill, however.

This colourful 3D platformer started life as an experiment in procedural animation, but eventually became a game in its own right. It’s quietly one of the best platformers on PC, with a brilliantly tactile climbing system and a world that reaches dizzying heights. Navigating robotic hero BUD around this blocky, stylised world is oddly relaxing, especially when you get the ability to glide and float around. The sequel, Grow Up, is worth a look too.

Play in Creative mode, which removes the need for harvesting materials and crafting fuel, and No Man’s Sky suddenly becomes an incredibly chill game. You can take your ship and lazily hop between systems, checking out random planets as you go, and it's a great way to experience just how many different landscapes and life-forms the game is capable of generating. Honestly, life's too short to spend hours stuck on a shitty toxic planet with no fuel.

This surrealist exploration game marries sound and visuals in a really captivating, imaginative way. As you wander around a procedurally-generated island, constructed from simple, abstract shapes, the dreamy music reacts to your actions. Then the seasons begin to change, dramatically transforming the landscape around you, and you feel your worries slip away. It only takes an hour to finish, but the layout of the world is different every time.

Universe Sandbox 2 is an enjoyable and completely physics-driven simulation of the universe. You can view realistic models of solar systems, distant galaxies, and planetary orbits. Or you can turn into an evil deity and start causing mayhem among the stars, smashing galaxies together and hurling the Earth into the Sun. It’s a great toy, and the ambient music and cosmic scenery are quite soothing, even when you're making a giant mess.