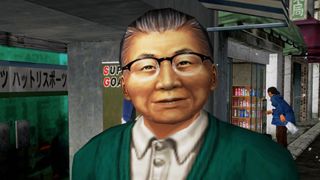 One of the many things I love about Shenmue is the feeling that the world exists without you. The people you see around you in Yokosuka aren’t just randomly generated NPCs wandering the streets aimlessly: they have routines, personalities, friends, places to be, and homes to go to.

In the morning you’ll see business owners arrive in Dobuita to start their working day. Then, in the evening, pulling the shutters down and making their way back home. Local biker Koji Yabe splits his time between playing games in the arcade, tuning his motorcycle, and eating burgers. Yoko Minato, a hostess, spends her days shopping in town before heading over to Bar Yokosuka in the evening to ply her trade. Your loyal live-in housekeeper Ine-san prays each night at the altar in the Hazuki residence before retiring to her bedroom.

These are simple routines, but combined they give each area of Yokosuka, from the high street to the suburbs, a palpable feeling of being alive, and a sense of community. There’s something nice about walking past Funny Bear Burger in the afternoon and seeing Ryuji Tatsumi from the thrift store there, as always, eating his lunch. Or knowing that Nozomi will be standing outside her grandmother’s flower shop every day. It creates a kind of cosy familiarity with the setting that I’ve never encountered in another videogame.

But there’s more. The original Dreamcast version of the game came with a fourth disc called Shenmue Passport that made use of the console’s built-in internet connectivity. This would let you submit your best minigame scores to an online leaderboard, unlock rare capsule toys, rewatch cutscenes, and more. But for me the best feature was the character viewer, which provided a backstory for every single NPC in the game, no matter how minor. Sega shut the Passport servers down in April 2002, but luckily these biographies were printed and preserved in the game’s official Prima strategy guide.

You’ve probably seen Yoshikazu Takahashi walking through Dobuita before, but never paid him any attention. He’s one of the many middle-aged salarymen who walk up and down the street every day. But when you read his heartbreaking backstory, you’ll never look at him in the same way again. His company went bankrupt, yet he continues to wear a suit, carry a briefcase, and leave for work every morning, because he can’t face telling his wife and children about it. They think he’s at the office, but really he’s wandering the streets of Dobuita, killing time, trying to build up the courage to tell them.

Some stories are more pleasant. Akio Enoki is a high school bully who regularly hassles Ryo, but there’s more to this cocky, grass-chewing delinquent than you might think. At night, making sure no one sees him, he visits the shrine in Yamanose and feeds Megumi’s orphaned kitten. Daisuke Ono is a member of the Mad Angels, a biker gang that Ryo has several run-ins with, but he only joined out of peer pressure. He wants to quit, but he’s too scared, and every day he regrets his decision to join. I love the idea of these bullies, tough guys, and criminals secretly being sad and conflicted about the life they’ve chosen, or revealing a softer side when nobody’s watching. It’s wonderfully human.

Other NPCs with interesting backstories include Cathy Wilkins, a red-haired woman who walks the streets of Dobuita at night. She’s secretly a military police officer with the United States Seventh Fleet, which is based in New Yokosuka Harbour. While it might look like she’s on a bar crawl, she’s actually making sure the sailors on shore leave in the city are behaving themselves. Rumiko Ishiwatari is on a similarly covert mission, appearing to most as a harmless housewife, but actually spying on Nagai Industries—a local yakuza organisation—for the Yokosuka police. And you know the guy dressed as Santa who appears in town around Christmas? He used to be a champion marathon runner, which is why he can stay on his feet all day. Of course.

The problem with these stories is that, unless you managed to access the Passport disc before the servers shut down, or read the strategy guide, you’d never know they existed. Some random lines of dialogue do seem to reference them, suggesting they weren’t simply written after the fact, but it would have been nice to see more of these details emerge in the game itself. This was almost twenty years ago, however, when videogame stories were still largely told through cutscenes and walls of text, so I can forgive Sega for not going further with it. If you’ve taken the recent re-release as an opportunity to play Shenmue for the first time, I recommend reading them, because it really does change your perception of Yokosuka and its citizens.

There are hundreds of NPCs in Shenmue, and I love that someone decided to give them all backstories—including the animals. Megumi’s kitten has a longer biography than some of the humans. But this ambition and attention to detail is precisely what makes Shenmue such a special, singular game. Developers boast about ‘living, breathing worlds’ all the time, but rarely deliver. Almost two decades later, Yokosuka remains one of the most believable virtual worlds ever built, because the people who inhabit it are more than just set dressing to give the impression of a bustling city: they’re an intrinsic part of how it functions.

Which makes the moment you have to leave for Hong Kong all the more unbearable. The game immerses you in the grounded escapism of Ryo’s teenage life to the point where Yokosuka starts to feel like home. There’s something comforting about seeing these people every day, watching them going about their daily lives, getting to know them. And then, suddenly, you’re forced to leave it all behind. As I highlighted in my review, Shenmue is an incredibly melancholy game, and the last few hours—knowing you’ll soon be saying goodbye to this quiet, snowy, beautiful place—is when the downbeat atmosphere hits hardest. A feeling given weight by the fact that Ryo’s driven, single-minded quest for vengeance is, fundamentally, stupid and reckless.

Considering you spend the majority of Shenmue asking people questions, following a seemingly endless breadcrumb trail of clues, it makes sense that Sega would go to such great lengths to bring its characters to life. I love Yakuza, considered by many to be a spiritual successor to Shenmue, but the crowds of pedestrians who clog the streets of Kamurocho and Sotenbori feel so faceless and machine-generated compared to the people of Yokosuka. This kind of simulation is probably enormously expensive and difficult to build, especially to a modern standard. But it’s the reason why, despite the visuals undeniably showing their age, Shenmue still boasts one of the most immersive, atmospheric, and believable settings you can explore on PC today.