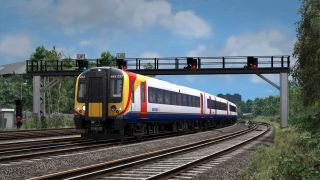 Train Simulator 2020, the latest version of Dovetail's 2009 railway romp, has a lot of DLC. 569 items are listed on Steam, amounting to an eye-watering £6,517$10,145. Some of them are over a decade old, so trying to figure out what's worth buying is a bit of a challenge. Or you can just grab this Humble Bundle.

The first tier of the Humble Train Simulator Bundle nets you a copy of Train Simulator 2020 and four add-ons, introducing new lines and trains, for $1 or more. Pay more over the average and you'll get six more pieces of DLC, whisking you away to the exotic places like the North Jersey Coast.

For $12 or more, you'll unlock the whole bundle, which includes six more add-ons that throw—yes, you've guessed it—even more trains and train lines to the mix. It's a dizzying array of locomotives and the other kinds of trains that exist, presumably.

So! That leaves you with 553 more bits of DLC to hoover up. You're well on your way to completing your collection.

I think I'm going to have to get this for myself. Until now, I've admired the heart-pounding thrills of train simulators from a distance, but I think it's finally time to bite the bullet...train (yeah, I'm getting into it now) and jump aboard.