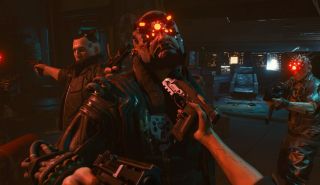 Tom and Sam have been at Gamescom all week. It's never really a show for big software announcements, but it usually lets the media and the public get a more detailed look at the big titles out in the coming months. PC Gamer has collectively seen or played around 50 games this week, and below we thought we'd collect some of the highlights. Note this is just a selection of some of the games that were there. Neither of us played Sekiro, for example, which James had nice things to say about earlier this week. Likewise, Chris played Rage 2, and Phil checked out the promising Desperados 3.

For clarity, we saw hands-off demonstrations of the first four games on this list, and actually got to play the latter four.

It was the same demo CD Projekt Red shared at E3 behind-closed-doors, but since none of it has been released publicly and probably won't be for ages, it has maintained its mystique. For me and Tom, it was the first time we'd both seen the game running in action. Its absurd levels of detail, particularly in exterior environments, does feel like the thing I've never seen in a game before. This thing must've cost a fortune to make. Where the recent Deus Ex titles give nice little hints of a much larger cyberpunk world via little hubs, this feels like it's showing you everything: the big shiny advert screens, the weirdos on the streets, even down to details like Cyberpunk's aggressive and absurd version of health insurance. It looks as exciting as everyone tells you it does, even if as a shooter it only looks moderately exciting.—Samuel Roberts

Seeing Dying Light 2 in action, I totall understand why a zombie outbreak proves such a good fit for a branching open world game. Its showing at Gamescom was apparently just a repeat of the hands-off E3 demo, but it illustrated how choice works in the game by using a water tower that the player can reclaim as an example. You'll head up there, and encounter two suspect characters called Jack and Joe. Kill them, and the Peacekeepers faction can take the tower, cleaning up the area, offering free water to survivors (including you) and setting up new parkour points to help you get around.

If you choose to make a deal with Jack and Joe instead, though, the area around the tower remains run down, but now they'll charge people for the water—and crucially, give you a decent cut. The world around you actually changes, for better or worse.—Samuel Roberts

The opening half-hour did a great job of setting up the game’s characters and I already feel compelled to play more and see how Sean and Daniel cope on their long road trip.

Life is Strange 2 doesn’t follow on directly from the first game, but it‘s a similarly sensitive and well-written account of teen life, and it can move suddenly from sedate suburban patter to moments of extreme crisis. The Gamescom demo gently introduces you to Sean’s home life and then rips the floor out. I have a feeling this one is going to get brutal.—Tom Senior

I'll have a longer piece about this FTL-like coming later today. It's like a more complex version of Subset Games' space strategy roguelike, where you'll need to feed your crew, burn down modules of your ship to gain resources and collect more than one currency to keep buying stuff. Crucially, too, you'll make choices when confronted with hundreds of little story instances, and earning 'fate points' from good decisions lets you buy more resources when you start your next run. It's not as polished-looking or immediately easy to grasp as FTL, but I loved the writing in what I saw, as well as how detailed some of the systems are. If you want to save on food supplies, for example, you can put your crew in cryostasis so they don't need to eat. Plus, every ship has a cat on-board. It's out in Early Access later this year.—Samuel Roberts

Every time I'm having fun with Assassin's Creed, I feel like I should double check I haven't somehow made a mistake. I liked the second game and what I played of the fourth one, but it's a series I burned out on, and found too oversimplified to keep getting excited about. Despite a deluge of low quality sidequests, last year's Origins was a game I genuinely loved, and that same format is the basis of Odyssey. Ubisoft smartly let the media play the game from level 50, opening up access to the game's entirely new range of special abilities, like shield breaks, Spartan kicks and shotgun-style multi-arrow shots. Each ability was levelled up to their maximum tier, so the shield break was so powerful it sent enemies flying. I can't believe there's an Assassin's Creed coming out where the combat is the thing I'm most excited about.—Samuel Roberts

I haven’t loved a Battlefield game since 3, so it was a pleasant surprise to feel excited about the series again. The Rotterdam map I played on this week was a bit rough around the edges, but created tense long-range firefights and desperate short range scuffles. The squad focus and diffuse class roles put a welcome focus on teamwork and fortifications actually came in useful for providing cover around exposed control points. The World War 2 setting is such a good fit for Battlefield as well. I could end up sinking 50 hours or so into this one.—Tom Senior

This side-scrolling shooter is all about sweet-looking combos. You can do a spinning wall jump, kick a frying pan into a goon’s head, then shoot the pan to kill another goon with the ricochet. A very generous helping of slow-mo time helps you pull off more complicated moves that involve shooting at multiple goons simultaneously, and the controls for split-fire are inspired. Holding down the right mouse button aims one gun in that direction, then you mouse over to your second target and left-click to fire both guns at separate targets. This lets you clear out entire rooms in seconds, ideally while doing a flip or riding a skateboard. The game feels awesome on mouse and keyboard and you can even export your coolest takedowns as gifs.—Tom Senior

I beat a poor guy to death with his own didgeridoo. Do you need another game this year?—Samuel Roberts