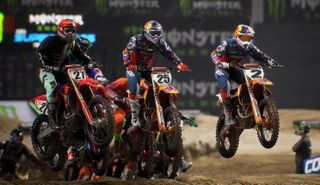 The Stadia streaming game service has been taking some heat recently, arising from the limited selection of games, ongoing absence of features like 4K support and Google Assistant functionality on PC, and a perceived lack of communication about where it's headed next. In January, for instance, it announced that more than 120 new games would be coming to the platform this year, but offered nothing in the way of titles or timelines.

One of those games was revealed in today's This Week on Stadia update as Monster Energy Supercross – The Official Videogame 3, which launched on multiple platforms today. The Monster Energy branding is obnoxious, but apparently it's not a bad game: The PS4 version currently holds a respectable 71 score on Metacritic. (The PC version is still TBD.) Still, I can't shake the feeling that it's a little bit of an underwhelming response to the growing impatience for new games. With discontent on the rise after less than three months of release, Stadia needs some eye-poppers, not a niche-interest branding exercise.

Another issue is the price. Monster Energy Supercross 3 is $60 on Stadia, but only $50 on Steam. There's no indication of any difference in the Stadia edition, aside from the "play anywhere" accessibility of streaming games—it's just more money.

Most games on Stadia are priced the same as they are on Steam (unfortunately, and inexplicably, Stadia doesn't maintain a store that can be browsed by non-subscribers, but Android Authority has a price list updated to December 26), but there are a few other exceptions: Farming Simulator 19 is $40 on Stadia, for instance, compared to $25 on Steam, and Final Fantasy XV is $40 on Stadia and $35 on Steam. I've reached out to Stadia to inquire about the difference, and will update if I receive a reply.

Stadia also announced today that the Joker is now available in Mortal Kombat 11 on the platform, for $6 on his own or as part of the Kombat Pack, which is on sale for $16 until February 5—a significant discount on the regular $40 price if you can get to it in time.

Stadia's troubles have been well-publicized, and while some teething pains are to be expected when launching a new game service, its not going to have an easier ride anytime soon: Nvidia launched its GeForce Now cloud-based gaming service today, and it looks very promising.