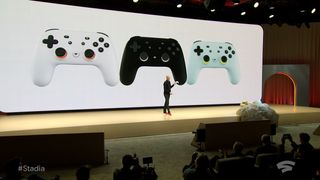 The Google Stadia Pro free game library will grow by two on February 1, when Gylt and Metro Exodus make their debut on the platform. Unfortunately, it will also shrink by two right around the same time: Google said in the first "This Week on Stadia" update since December 26, 2019, that Rise of the Tomb Raider: 20 Year Celebration and Samurai Showdown will both be removed from the lineup on January 31—although you'll keep both as long as you claim them before they're gone.

That's the whole of the update, and while response on the Stadia website is largely positive, the situation is very different elsewhere. The timing is likely coincidental, but this Reddit thread (via Kotaku UK) notes that prior to today's blog post, it had been 40 days since the last "new game announcement/release, feature update, or real community update," on a platform that's only been out for 69 days. Google did announce earlier this month that it plans to add more than 120 games to the service this year, including ten exclusives, but no names or other details were provided; other features currently unsupported on PC, like 4K and expanded Google Assistant functionality, are still only targeted for sometime in the first quarter of 2020.

Replies on the Reddit thread range from practical suggestions—redditor Ins0mn3ac called for the three-month Pro subscription period included with Stadia Premiere purchases to be increased to six months—to somewhat less-focused expressions of frustration. Tellingly, Stadia community manager GraceFromGoogle responded to the thread with sympathy, but nothing else.

"All the concerns you've brought to the table are completely valid, and I understand where your frustrations are coming from. Nobody likes to be left in the dark," they wrote. "While I don't have product updates to share right at this second, I can promise you that I have been, and will continue taking feedback posted to r/Stadia and other channels, like the Stadia Community Forum, back to the Stadia team."

We said that Stadia wasn't ready for prime time when it launched late last year, but the bigger issue is Google's stumbling performance since then. The Stadia Community Blog has only had nine updates since the platform went live, including just two this year, which really isn't a great approach for a system that's big on promises and not much else.

And while its community team is responsive to complaints and inquiries on social media, it rarely seems to have anything of substance to say. Less than an hour and a half before today's update went live, for instance, a Stadia rep told a subscriber on Twitter that it had no news about "when or if" Rise of the Tomb Raider would be removed from the Pro lineup.

Hey Nicos, thanks for reaching out. We don't have news to share when or if Rise of the Tomb Raider will be removed from the claimable Pro games. We'd suggest keeping an eye out on our social channels for announcements. (1/2)January 28, 2020