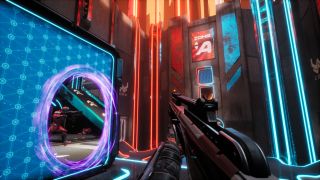 In the movie Summer Wars, there’s a scene where the main character, a young man whose only major accomplishment is placing first runner-up in the Math Olympics, is attempting to hack his way into the system of a plummeting satellite that threatens to annihilate the girl of his dreams and her whole family. After repeatedly failing to work out the password fast enough on paper, he makes one last-ditch effort to calculate it all in his mind, causing his brain to overheat and bloodshot eyes to twitch in opposite directions like they’re playing a twin-stick shooter.

At times, this is what it feels like to play Splitgate: Arena Warfare (formerly known as Wormhole Wars), a first-person shooter that blends deceptively simple shooting with the dimensional gymnastics of Portal. There are no Counter-Strike-style bullet spray patterns to master here, and your reticle won't grow to the size of a small car when you fire off more than three shots. But there's also that sense of taking flight you get from Titanfall, where the best players were parkour masters adept at outflanking enemies. Splitgate’s guns remain steady through all this hectic motion, and in fact the inertia of flying through portals almost seems to make which gun you run with irrelevant if you can close the gap and get the drop on your enemy.

Draw a straight enough line and the killstreaks will come.

After a brief crash course in the game’s mechanics, I felt like my mind was tying itself in knots as I tried to get the drop on opponents. It was apparently so visible that 1047 Games co-founder Ian Proulx could see it written on my face.

“It was cool watching you play actually because I could see your brain thinking about [how portals work] and it's not yet instinctive for you,” Proulx told me during the 2019 Game Developers Conference.

I’m an unabashed Portal fan, and seeing that mechanic wedged into a shooter sent my thoughts spiraling in all sorts of possible directions. But strategic potential aside, Splitgate is a pretty straightforward arena shooter. 1047 Games has the usual assortment of modes you’d expect from a multiplayer shooter: Deathmatch, king of the hill, oddball, domination, and an armor-free “team SWAT” mode among others. Classic weapons abound too, like a few variants of battle rifles, SMGs, rocket launchers, surprisingly tough pistols for the Halo fans, and a railgun.

The portal mechanic is where things really get interesting, and each level is built in such a way that you’re meant to reach for the aerial headshot ballet that classics like Quake and Unreal established in the late 90s.

Proulx isn’t oblivious to the challenges facing any shooter that doesn’t have 60 player matches and a battle pass these days, though. Quake Champions has spent almost the past two years in early access, with little word on a full release date, and the latest iteration of Unreal Tournament fell victim to Fortnite’s juggernaut success.

“I think some people look at our game like ‘oh, no one cares about arena shooters anymore.’ I totally couldn't disagree more,” Proulx said. “I don't agree with that. What I see is a lot of battle royales, which is in its own right a great genre, but a lot of people are getting tired of it. It's fun, but it's not that much different. It's sort of the same experience. I actually saw Dr. Disrespect talking like two days ago on a stream how he's just so sick of everything out there. And he's strongly considering taking months off because he just doesn't enjoy playing the same experience over and over again. I think there is a real demand for something different.”

On the surface, Splitgate’s blend of portals and fine-tuned aiming certainly get the mind running. Proulx says he’s even been surprised by how other Splitgate players in alpha tests have adapted to the tactics he’s developed since the game started out as a college project.

“I remember this was 200 hours into playing, and I had sort of mastered the idea of using my momentum to get to places and flanking enemies,” Proulx said. “I came up with an entirely new strategy because people started catching onto my flanking. I told you how people in our community, they see me and they turn around because they know 'he's gonna spawn a portal behind me.' So instead I’ve started running a certain way and spawning a portal on a separate side.”

I found myself exercising some of the same strategies as I played, scouting out enemies from afar, placing one portal near them and retreating back to a secondary portal closer to my own position. Simple hallway-to-hallway fights are still possible and enjoyable, and the basically non-existent recoil keeps shooting from devolving into uncontrolled chaos. But that does mean it can feel a little weightless when you headshot.

I did appreciate that Splitgate has a relatively high time-to-kill. Despite all the slick headshots in trailers and gameplay clips, playing against some bots felt like a manageable fight. Guns themselves have Halo's low recoil, and true to Halo form, the pistol is just as valid a long-range weapon as anything with a two-foot barrel. The only two bars you’ve got to worry about are your jetpack and your regenerating health, so unless your enemy snaps off a really killer headshot or just outright ambushes you, odds are you’ll be exchanging a bit of fire before a fight's decided. It was only when I totally bungled a portal location or just wasn’t familiar enough with the level design to escape that I went down fast.  Personally, I’ve always found Halo a little too dependent on high-precision aiming instead of fast-paced flanking, so the marriage of these principles felt good to me.

Levels are designed with plenty of high-flying and flanking tactics in mind. A particular favorite is the bed of portal surfaces beneath an orbiting space station, letting you gain some significant speed for aerial attacks. There are some standout maps, like a nightclub with a large “dance floor” of sorts, and a temple with textures and architecture that feel a little more earthy than neon factory.

Proulx admits the goal of sustaining a modestly-sized community in the shooter world is getting harder and harder, but responding to a smaller community can be easier, too. While PUBG developers spent months touting a plan to fix bugs and address community concerns almost via committee, 1047 Games makes a point of responding to every single comment they see on their community Discord server, plus some more standard maintenance like alpha test surveys.

The videogame-plus-other-videogame recipe gets a little more complicated when it comes to how they plan to keep Splitgate from suffering the fates of Unreal and Quake. Aside from the community management stuff, 1047 Games have also added alternative game modes and modifiers that can turn matches into whoops-all-rockets gibfests, with zero gravity and unlimited ammo to match. That's nothing new, but it's presented in a way that today's Rocket League players would find familiar, where the base gameplay is pretty simple, but one mod can reinvigorate interest, at least for a time.

“We don't want to add all these different perks and classes and everything,” Proulx said. “There's one mechanic that takes hundreds of hours to master, but as you're mastering it and developing it, you're doing all sorts of crazy things. All these aerials people pull off. You can't even comprehend the first time you see it."

The plan is for Splitgate: Arena Warfare to cost $20-30 when it comes out this spring. Considering the last two years of shooters has been dominated by a mode that didn’t really exist before a 2013 DayZ mod, maybe a fresh portal injection can give arena shooters a shot at a comeback.