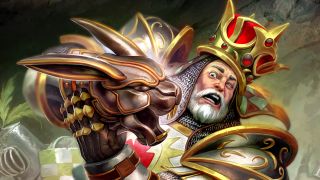 Is your Tyr insufficiently kingly? How conventional is your Ying? These are questions we ask ourselves every day, and this weekend we will do our best to ensure that you need never ask them again. Thanks to Hi-Rez, we've got 1000 codes for Smite and Paladins to give away.

If you're unfamiliar, Smite is a free to play MOBA with a mythological theme that is played from a third person perspective. Heavy emphasis on skillshots and the fast pace of the play set it apart from other games in its genre, as does a generous free-to-play model that lets you pay once to unlock every character, including new ones, forever.

Paladins is a team FPS with MOBA and card game elements. It wears its influences on its sleeve - it's squarely in the same territory as Team Fortress 2 and Overwatch - but after a long period in beta it has established its own identity. Being able to customise your character mid-match adds a strategic element similar to a MOBA, and there are some really cool character designs to be found beyond the familiar tanks, healers and damage heroes (you'll find a skin for one of them below.)

All you need to do is fill out the forms below to register your interest. You've got until 17:00 CEST / 08:00 PDT on Sunday January 22nd to do so. At that point, 1000 lucky entrants will receive an email with their code. You're welcome to enter both giveaways, but we can't guarantee that you'll get both codes. Good luck and have fun!

This Monty Python-inspired skin for Norse warrior Tyr gives him an Arthurian makeover, including new spell effects and new voice lines. It'd normally cost you 400 gems, which is $7.99 in regular money. For a chance at getting it for free, fill out the form below. For more on Smite and to download the game, click here.

This skin was part of the Digital Loot Pack that Hi-Rez sold as part of their promotion of HRX 2017, and it's no longer available as part of the in-game store. That means that we're currently your only hope of getting an orangey-blue Ying if you don't already have one. That's not a sentence we've had to write very often.

Ying's a versatile, high-skill support character whose abilities revolve around the use of illusions. These (mostly) stationary duplicates heal nearby allies, act as teleport beacons for the main Ying, and can be activated to pursue nearby enemies and explode. Playing her effectively means staying on the move, ensuring that you have illusions on hand to help your team, and luring enemies into traps. If you don't play support because you find it too passive, give her a try.

Fill out the form below for a shot at getting a key. To find out more about Paladins, click here.