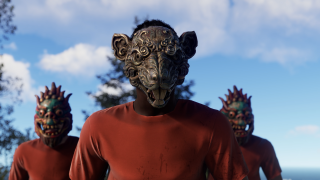 Rust is getting in on the Chinese New Year action—who needs a calendar when we have games?—with a bunch of new items that you'll be able to get your murderous hands on later today, one of which will let you disguise yourself as a rat.

It's not a very good disguise, mind. It's an ornate and faintly terrifying mask, so you'll only be able to trick the most intoxicated of Rust's players into believing you're the animal of the year. You'll be able to get the mask from the market, along with returning items like the dragon mask and door knocker.

You can't celebrate New Year without lots of loud noises, so you'll also be able to fire off fireworks and firecrackers, as well as creating a terrible din with the new deployable gone. Rust introduced instruments with a DLC pack last year, and you'll be able to make a lovely tune by banging or simply shooting the gong.

Inevitably the celebrations are going to descend into murder, but it wouldn't be Rust without marauding bands of killers trying to stop you from creating lovely music or admiring the fireworks. Stay safe out there.

The Lunar New Year Update kicks off at 7 pm GMT/11 am PT today.