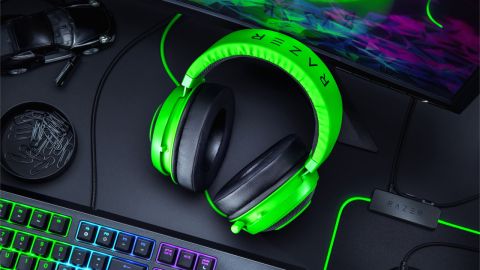 A truly tremendous gaming headset you can easily have confidence in. It’ll have you well covered whatever you like playing, delivering quality and rich sounds to your ears consistently, while also competent enough to be your go-to headphones for other media.

Razer has a healthy range of gaming headsets, and many of them sit in the upper echelons of ‘best of’ lists across the internet. And now there’s a new kid on the block: known simply as the Razer Kraken it’s part of a mini suite of Razer gear designated as the manufacturer’s ‘essentials range’. The Kraken is the third generation of this headset, promising a honed and enhanced bit of kit that builds on everything good and great that came before. But does it? And how does it stack up against those that rank on our list of best gaming headsets?

At first inspection it looks and feels the same as the Pro V2 and similar to the Tournament Edition, and that’s fine. The Kraken series had, and maintains through this headset, a distinctive style mixed with quality in build. The exterior and aesthetic is largely familiar, and the enhancements and developments have occurred under the hood. The aesthetic is just as cool as previous Krakens and keeps the distinct design quirks and mix of colours; the two main elements of the solid headband and the semi open nature of the earcups seamlessly come together and still work as a whole. The solidity is still present with the earcups feeling bash-resistant as well as light; the headband feels very secure—finished with more cushioning than ever—and each click on the sizing ratchet is solid and unlikely to slip. Given the quality of the build and the the solid materials used, I might have expected it to have a hefty weight to it, but it maintains a feathery touch, coming in at around 10.5 ozs/300 grams. Impressive.

On the headset itself, no buttons are built into the structure or housing, and no frills penetrate or adorn the cups. The headset and sound does the majority of the Kraken’s talking in terms of features. The neat and retractable microphone is again a stand out feature—it's incredibly compact and because you can stow it away, it means you can use the Kraken as regular headphones or a full-blown gaming headset.

Down the cable, there’s a small, integrated control box that includes a volume roller dial as well as a microphone, much like in the TE. It’s convenient and is the only on-board controls, but it's worth noting that the volume roller does all audio and not just game or chat, so a balance might take some finding depending on your preferences. The cable is an audio jack connection which makes it appropropriate for all gaming setups if you switch from your PC to consoles, mobiles or tablets, however there is a splitter included which is ideal for dividing the input for mic and headphones. Handy.

I found that while there was no ‘feature’ or designated noise-cancelling tech on the headset, the design of the earcups is such that they naturally help to exclude outside noise, though if you’re sharing the room with someone, they may well also hear your ingame audio as it seems to leak or pass through the headphones a little. Generally, in terms of features, I did think that for a near $100/£100 headset I would have expected a few more features, perhaps: some presets for gaming, a party audio vs game audio adjuster or audio boosts of some kind (which are becoming more and more prevalent in headsets up and down the price scale).

Headsets are pretty major investments and can last years, spanning many generations of PC upgrades. With this in mind we always try to review them hard, testing them for long periods with loads of games. A session playing through Wolfenstein II was incredibly enjoyable, with the Kraken doing well in terms of both performance and comfort. Dialogue in the cutscenes is tremendously clear and even small, previously almost-unheard sounds when using speakers are presented well by the Kraken. Navigating tighter spaces of the game such as buildings and urban areas and fending off Nazis from corners, I could always tell which way they and their gunfire was coming from due to the excellent surround sound. There were no gaps, losses, or obvious transitions in the audio when changing orientation.

When trying out Doom, the Kraken handles the bass-heavy noises and fast, pacey soundtrack well. It shows off the headsets 50mm drivers well, and although there’s little subtlety to this kind of audio, it’s great to know the headset handles it. To get a good spread across the audio range I turned to the slightly older title, Titan Quest, as its sword and sorcery setting and gameplay, combined with its light and plucky soundtrack that has its home in the treble and middle ranges, ensured that the Kraken would get a run out across a broad range of games. The audio held up here and was nice and full, each pluck of a string or lightly spoken word was presented to me clearly and rarely lost or obscured.

Turning to Apex Legends to test the Kraken’s microphone I found even more to like. The surround sound was directly responsible for identifying enemy locations to the point of informing tactics and dictating what should be done in the game itself. The microphone also really impressed here and I was crystal clear to my teammates; the pull out mic coming around to the front of my face proving to be an effective, tried and tested design. The only slight criticism here is that my voice overall was clear, but a bit tinny, so not as fully rounded as one might hope. The other way, my teammates’ voices were clearly presented and with no hollowness or tinniness. A slight complaint here was that I was crying out a bit for some sort of means to address the balance between party chat and game sound as everything was coming through, clearly and richly of course, but very loudly and I could only turn everything down rather than subtly address a balance( which is possible on other headsets). It got hard to concentrate during the busier games of Apex Legends.

To complete the set of media testing, I turned over to Netflix and also tried a Blu-ray or two to see what it made of films and TV. The short review here is that it was all round a good and consistent performer though just sometimes lacked in some richness of dialogue-heavy scenes. As it started to hint at when playing Doom, the Kraken is a nice headset for music too and while it excelled most with metal and rock and bass-heavy tunes, it was certainly comfortable and competent enough to handle a whole afternoon of a range of music from rock and roll to orchestral soundtracks.

Generally the Kraken is a very comfortable headset and there’s nothing that really identifies it as anything else. The padding works in terms of semi-moulding to your ears and it was comfortable when I had to shift it or move myself around. There was a slight ache on the bottom of my ears after long sessions but not really a whole lot more than any headset I’ve tested. All in, the Kraken performed exactly as I’d expect a premium, designated gaming headset to perform: performing well in game audio, though not quite with the same quality of those headsets further up the price scale.

A truly tremendous gaming headset you can easily have confidence in. It’ll have you well covered whatever you like playing, delivering quality and rich sounds to your ears consistently, while also competent enough to be your go-to headphones for other media.