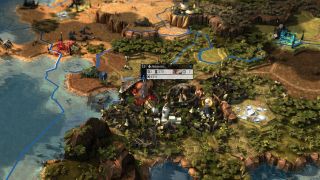 In each issue of PC Gamer magazine we dedicate a handful of pages to the games that are occupying our time—from the brand new flavour of the month, to that old compulsion that we just can't shake. This month we go rambling in the wilderness, exert control of the global economy, and finally (?) break free of Hearthstone.

I’m deep into a campaign in Endless Legend, the strange and mesmerising fantasy 4X game from Amplitude Studios. In my campaign, global power dynamics have been solidified for centuries. The Cultists—mannequin-like beings that assimilate and enslave lesser peoples—are spreading their mysterious teachings, while the regal Drakken can be seen as the self-described ‘goodies’, gaining power through science, knowledge and trade agreements.

But behind the scenes I, as leader of the Roving Clans, am exerting soft power through that barely visible force of economics. I control the global marketplace, deciding who gets to be part of it, and taking cuts of every market transaction. I’m accruing wealth beyond measure while others tumble around with wars and politics, and am closing in on a satisfying economic victory.

When Endless Legend came out in 2014, it shook up the genre. It followed 2012’s cosmic 4X game Endless Space, continuing to build the ‘Endless’ mythology typified by a bizarre mix of fantasy factions with aggressively different playstyles, RPG elements, and a sense of wonderment evoked through excellent writing.

In each playthrough, you’ll come into contact with dozens of minor factions, each with their own backstories and desires that you can help fulfil through sidequests, or overrule by simply destroying them.

It’s rare to see such commitment to story in a genre that’s synonymous with the Civilization series, where the centuries-long race towards one of five victory conditions has become rather rote; mystery and wonder replaced by a cold, optimised surge towards a prescriptive conclusion.

Endless Legend is still partly tied to this lineage, adding a ‘story’ victory type to the usual suspects of science, economic, diplomatic and elimination ones. But along the way it pulls you into a thousand little tales that make each game feel like so much more than a race to the finish line.

As Amplitude works on Humankind, its history-spanning 4X game that’s set to be the studio’s first direct rival to the incumbent Civilization, I’d love to see the game retain some of that storytelling magic.

That narrative flair could, for example, be used in the early game to show how ancient people tried to make sense of the world’s mysteries. Storytelling, superstition and myth were integral to early civilisations, and Endless Legend demonstrates how well these things can complement a 4X game.

Humankind is unfettered by the expectations associated with a long-running franchise like Civilization, and shouldn’t be afraid to pluck some ideas from Endless Legend. Such a lift from Amplitude’s own past would be a fitting addition to a game interested in exploring how old cultures never fully disappear, but continue to quietly influence those that replace them.

Of all the genre phenomenons to rise over the last decade, auto battlers are the most baffling yet. Not only impossible to explain to anyone who hasn’t played one, the likes of Dota Underlords, Autochess and Teamfight Tactics are also reliant on players being fluent in the characters and conventions of another existing game to have even a hope of getting started.

As editor of the world’s leading PC gaming magazine, it was a source of some embarrassment that I’d failed to make that leap myself. Hearthstone’s new Battlegrounds mode was at first, then, a great relief—finally the genre comes to a game I not only already know well, but that deals in accessibility and clarity more than almost any other.

Doing away with much of the genre’s complexity, Battlegrounds reduces the concept to essentially just buying minions to build teams with the best synergies you can manage, and watching them automatically scrap. It quickly becomes obvious that the familiar ‘tribes’ are the most important element—when Murlocs, Beasts, Mechs, or Demons are grouped together, they enhance each others’ abilities.

Within my first match, I’m hooked. The simplified strategy still boasts enough little decisions moment-to-moment to be enthralling, and when your tactics pay off it’s deeply satisfying.

But before long I realise I’m experiencing all the same problems I had with Hearthstone in accelerated microcosm. Like the main game, it’s fun to win but deeply boring to lose. Randomness is a huge factor, giving newbies more chance at an exciting victory but diminishing any sense of actual control over events. A few key combos rule over all, crushing the meta into a narrow band. And, thanks to long pauses between rounds, I find myself spending as much time checking Twitter as I am deciding team comps.

Just a few days after I first dipped my toes, I already feel like I’m wasting my time, a pathetic victim to Blizzard’s addictive design. It’s a feeling I know well—it took me years to realise how little fun I was having in Hearthstone and break away. Can’t fool me again, you lot. But I have to thank Battlegrounds for finally letting a knucklehead like me understand auto battlers. Maybe one day I’ll even play a grown-up one.

Travel to the far north of Red Dead Redemption 2’s vast open world and you’ll eventually find yourself in the Grizzlies: a chain of blizzard-battered mountains crawling with bears and dotted with snowy forests. There are a lot of beautiful places to explore in Rockstar’s Wild West, from the bustling St Denis to the plains of the Heartlands. But it’s those cold, isolated Grizzlies, in all their beautiful bleakness, I find myself returning time and time again.

Even in the most remote parts of the countryside you’ll find traces of people, whether it’s a hunter setting up camp or a passing stagecoach travelling between towns. But when you’re up there in the Grizzlies it’s just you and the landscape, which makes it one of the most atmospheric places in the game. Trudging through fresh white snow, listening to the howl of the wind in the trees and the distant call of animals, it’s utterly transporting. A lonely void miles from the nearest settlement, immune to the creep of civilisation. It’s complete heaven for a sad cowboy.

I also like the ritual of selecting an appropriate outfit for a trip to the Grizzlies. You won’t freeze to death up there—Red Dead’s survival simulation isn’t that deep, unfortunately—but you do get cold, which negatively affects your stamina. So before you ride north it’s best to grab a cosy, fur-lined coat from your horse or camp to keep the chill away. This reinforces the idea that you’re journeying somewhere dangerous and inhospitable.

You’ll know you’re getting close to the mountains when you see plumes of breath escaping from Arthur’s mouth and the green slowly giving way to a sheet of white.

When I’m up in the Grizzlies I like to turn the music off, put on a pair of good quality studio headphones, and lose myself in the ambience. Red Dead Redemption 2 is a gorgeous game, no doubt, but the sound design does a lot of the legwork too. You can almost feel the cold as you move through the environment, clumps of snow falling from trees when you brush past them, ice cracking and warping as you walk over frozen lakes.

But as an escape, and a way to literally get away from it all, the Grizzlies is a remarkable expanse of rugged, but serenely beautiful, country. The volume of things to do in Red Dead Redemption 2 is impressive, and I don’t just mean missions, hunting, or other prescribed activities.

The fidelity of the world is such that you can kill a few hours just wandering aimlessly, doing nothing in particular, soaking up the atmosphere, seeing what you stumble into on your way. And nowhere is this kind of rambling more evocative and immersive than in the Grizzlies. Just watch out for the bears, because they will eat you.

I fire the missiles on this spaceship. It’s not as complicated as it sounds. Sometimes I just press the big red button and watch the cannon kick back as the laser fires. Other times I have to hold the button down first. If it’s a really hard day, you’ll find me lugging volatile rockets to the arming station, before loading them into the launcher. After that, though, it’s buttons again.

Don’t get me wrong, I’m not tired of watching alien fighter craft explode. It’s just that, sometimes, I wish I could load a rocket with melted cheese, or serve it on a bed of rice.

I should explain: Catastronauts is an Overcooked reskin that relocates the running around to, essentially, the Starship Enterprise. Your working environment exists in a perpetual state of crisis: as much as you’d like to fire salvo after salvo at your enemy, you’ll often have to prioritise fixes to a hull that threatens to tear apart, or put out fires in the medical bay (somewhere back on Earth, a kitchen is missing its fire extinguisher).

Like Overcooked, Catastronauts is designed to make lulls in conversation impossible. While you and a fellow player might fall into complementary roles, either defending the ship or manning the guns, the operation would fall apart without regular communication. Often one of you is trapped in a doorless compartment which, if fire breaks out, can only be saved by a comrade sending the extinguisher over via teleporter. Some powerful guns, meanwhile, must be operated by two people firing alternately. And in later levels, med bay respawns require someone to buzz you back in, a little like Left 4 Dead’s broom cupboard rescues.

It’s a philosophy that forefronts cooperation and makes clear just how rare it is, even in games supposedly built for co-op. Be honest: have you played Destiny or Borderlands with someone, or merely alongside them?

Catastronauts has plenty of meaningful ways to keep you talking, then. Where it falls down is the end goal. In Overcooked 2, I might be putting together a hotdog with ketchup—hold the mustard—plus halloumi fries and a luminous green soda. Once I’ve got my head around that, the next order could be a strawberry donut. It’s not just the methods but the objectives that are constantly changing, and that complexity speaks to a higher level of my brain. It’s the part of the game that leaves me near-delirious with concentration, washing dishes as I contemplate the orders board.

Odd though it is to realise, a simple change of setting has stripped away all of that variety. Though there are many ways to do it, in Catastronauts you’re only ever firing a big gun. Cooking, by contrast, is endlessly engrossing—specific and demanding in the way that killing aliens just isn’t.