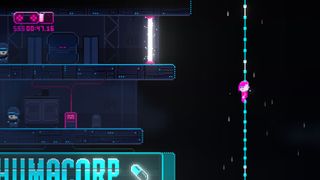 Lazr is an explosive cyberpunk platformer where you—the titular freelancing android with laser eyes—have to shoot and leap your way through corporate offices and neon streets. For all your futuristic tricks, however, you're a lo-fi gal at heart, and one of Lazr's most notable features is its cloth physics.

Sure, Lazr's a walking weapon with preternatural speed, but sometimes the most effective way to infiltrate a megacorp is just by climbing up a rope. Maybe that rope is also on fire. Indeed, the very first mission of the demo immediately tasks you with clambering up a burning rope ladder while assholes shoot lasers at you. It doesn't mess around.

Even at the best of times, my reflexes betray me, but on a Monday I'm even more useless than usual, so I confess I spent most of my time with Lazr dead and swearing. You've got to be nimble, dashing through closing doors and grabbing walls and ropes so you don't fall to your death, usually while avoiding a hail of lasers and bullets. Expect a lot of stopping and starting as you memorise the levels, but once you do Lazr has a compelling rhythm.

Lazr's shell is customisable, so you can upgrade your abilities and add skills like auto-fire and other handy tricks that make the bastard-hard levels a bit less crushing. More importantly, you can also get your hands on a holographic dog, which comes in a choice of colours. Maybe this dystopian future isn't so bad.

Creator Garrick Campsey made the prototype to test dynamic cloth simulation in a platformer, but now it's going to be a full game; though Campsey needs help from prospective Kickstarter backers to make that happen. Lazr's campaign is live now and is looking for $10,000.

"Lazr's original concept came from a challenge posed by a fellow programmer to add verlet (dynamic motion simulation) cloth simulations into a platformer," Campsey explains on the Kickstarter page. "A prototype was built, and it turned out to be so much fun, that a decision was made to turn it into a larger demo. A video recording of the demo went viral on Twitter, and a decision was made to make Lazr into a full fledged game. However, in order to achieve this goal, Lazr needs your support!"

The demo has been updated for the Kickstarter and now features 15 levels split into missions, challenges, training and social levels. There are a couple of boss fights, too, and 24 mods that you can stick on Lazr. You can grab it on Itch.io now. If you're playing on Windows and want to use an Xbox controller, grab the DX demo. If you want to play on Mac, Linux or use a Dualshock controller instead, you'll need to download the OpenGL version.