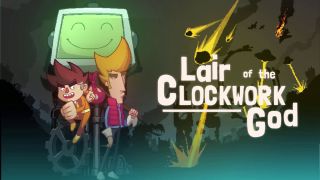 Size Five Games' Lair of the Clockwork God, the long-awaited follow up to indie point-and-clicks Ben There, Dan that and Time Gentlemen, Please!, has finally got a launch date: February 21, 2020.

It's been a while since we last saw Ben and Dan, what with Size Five Games having since worked The Swindle, Gun Monkeys and Behold the Kickmen, and they're a bit different since we last saw them. Instead of sticking to its adventure game roots, Lair of the Clockwork Gods has each of the two protagonists interact with the world in an entirely different genre: Ben stays true to his adventure ways, while Dan plays as a platformer, complete with wall-jumping and block-pushing.

To help explain the concept, Size Five previously unveiled the game with a lengthy gameplay trailer, showing how the two characters' unique playstyles bounce off of each other.

The stakes are high for Lair of the Clockwork God, as developer Dan Marshall has stated that it failing to sell may mean it will be the last game he works on. Which would be a shame, as while I didn't entirely gel with The Swindle, and the multiplayer Gun Monkeys died shortly after launch, Ben There, Dan That and Time Gentlemen, Please! were among my first exposure to the modern adventure genre, having not played one before that since Discworld on the Sega Saturn.

Lair of the Clockwork God launches on February 21. PC is confirmed, with a Steam page and everything, though console platforms will be announced at a later date.