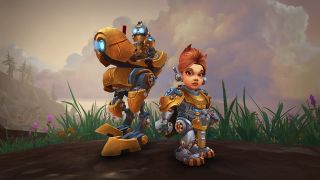 How do you unlock WoW Mechagnomes? With World of Warcraft's 8.3 update, body augmentation is no longer the realm of science fiction. That's right, like WoW Vulpera, the Mechagnomes are joining the Alliance as the latest playable race.

First introduced in 8.2, these little cyborgs hail from the island of Mechagon, where they were enslaved by their tyrant king. Now the Mechagnomes are free, they've joined forces with the Alliance to help finish the war against the Horde and N'Zoth, the recently-unleashed Old God.

Like any Allied Race introduced in Legion and Battle for Azeroth, Mechagnomes aren't immediately available for players: instead they are a reward for doing lengthy quests and some reputation grinding. Have no fear, though, this guide will break down everything you need to do to unlock Mechagnomes in WoW and cover their abilities, class availability, and more.

How to unlock Mechagnomes in World of Warcraft

Unlocking Mechagnomes requires to main steps. Here's what they are:

Tackling the entire Mechagon storyline takes time. If you haven't been actively playing, you'll have to work through a considerable amount of update 8.2's story.

Completing those requirements unlock a short quest chain that you'll have to complete to actually bring the Mechagnomes into the Alliance. Once that's done, you'll earn the 'Allied Races: Mechagnomes' achievement and you're free to create a new Mechagnome character (who starts at level 20) and begin leveling them up. You'll also earn a cool Mechagon Mechanostider mount for your trouble.

Like all races, Mechagnomes have a few racial abilities that'll slightly influence their play style. Those abilities are:

Here are what classes Mechagnomes can play:

Mechagnomes also come with a bunch of unique customization options, dance emotes, and voice over lines. However, what you really want is the Mechagnome Heritage Armor. Leveling a Mechagnome from their starting level of 20 all the way to 120 without using any boosts nets you a special set of unique gear tailored to the Mechagnome style. See what the Mechagnome dance emote looks like above.