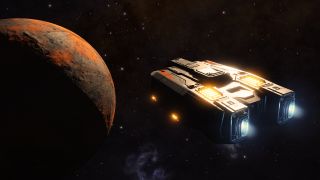 I've been playing Elite Dangerous on and off for years, since the very first alpha was released in 2013. I love it, but I've never been able to find my niche. I've dabbled in everything: exploration, bounty hunting, trading. But nothing really clicked. And so, after drifting aimlessly through the Milky Way, I inevitably lose interest and play something else. I always come back, but I've never found a compelling reason for it to be a permanent part of my gaming life.

Last week, that all changed. I was reading the Elite subreddit and discovered a career chart by Qohen Leth. Created specifically for players who are having a hard time figuring out how to spend their time in the game, this elaborate diagram was a godsend. I knew these activities existed in the game, but having them all spread out in front of me made me realise just how many ways there are to make a living, and enjoy doing it, in Elite's sprawling galaxy.

I decided, after some experimenting with various different career paths, that I wanted to become a space trucker. Trading is probably the least glamorous job in Elite, but I don't play this game for the fast-paced thrills and spills of space combat: I play it for the escapism, the atmosphere, and the sense of place. I'm here to fly rust-bucket spaceships, gaze slack-jawed at cosmic scenery, and pretend to exist in a vivid, lived-in science fiction world.

I also love slow, relaxing games, so the idea of hauling cargo back and forth across the galaxy while listening to music and podcasts sounded pretty appealing. I've spent almost 150 hours cruising the rain-lashed motorways of Euro Truck Simulator 2, so I thought this might tick the same boxes—albeit in a slightly more exotic setting. But first I'd have to get rid of my old Sidewinder, the game's all-purpose starting ship, and get myself a space truck.

At around 50,000 CR the Hauler is a perfect starting point for a greenhorn trader. This fat, squat little cargo freighter is essentially the Elite universe's equivalent of a Ford Transit, with a base cargo capacity of 22 tonnes. So I spend a few hours grinding missions in my Sidewinder until I have enough money to buy one. As soon as I take off in my brand new ship, I immediately feel like a space trucker. You can really feel the weight and size of Elite's ships when you fly them, and I love the leaden, chunky handling of the Hauler.

Compared to something like an Eagle, or even a Sidewinder, the Hauler handles like shit. But that's honestly part of the appeal for me. I like grounded science fiction: stories of normal people in incredible settings. I can play X-Wing if I want the buzz of being an ace pilot, but in Elite I enjoy indulging the fantasy of being a regular working stiff. And one of the beautiful things about the game's rich, diverse sandbox is that I can play that way if I want to.

Anyway, now that I have a Hauler it's time to start commodity trading. It's frowned upon by some hardcore players, but there are third-party tools you can use to locate profitable trade routes in Elite. Personally, I see no issue with playing this way, so I use the route planner on EDDB and start shifting goods between stations. Earning money is part of the appeal of the trading experience, sure. I get a sharp endorphin rush whenever I make a tidy profit. But, ultimately, what I enjoy most about this line of work is the journey itself.

Elite is an extraordinarily immersive game—especially if you play with a flight stick and throttle. I'm using the preposterous Warthog, a gloriously weighty (and stupidly expensive) thing that makes every interaction with your ship feel wonderfully tactile and satisfying. But even with an Xbox controller, the responsive ship handling, superb ambient sound design, and beautifully realised sci-fi aesthetic are enough to draw you into the fantasy.

So even though all I'm doing is docking at a station, picking up crates of fish or coffee or power cells or some other random commodity, then shipping them off to another station, it's compelling. The simple act of travelling through space in Elite—lifting off, jumping to a new system, entering super-cruise, requesting docking permission, landing—is inherently enjoyable because the game feels so nice to play. And with a good podcast or album playing, it's a strangely hypnotic, peaceful way to spend a couple of hours.

It also helps that Elite Dangerous is a treat for the eyes. As I fly around its 1:1 scale simulation of the Milky Way I'm forever stopping to stare awestruck at asteroid belts, planetary rings, binary stars, and other dazzling astral vistas. Jumping into a new system and nosing around its planets before continuing on with your journey is a nice distraction from the job at hand, even if it does massively increase your chances of being interdicted by pirates.

Eventually I earn enough money to buy a better trading ship: the Lakon Type-6, a bulky transporter that sets me back around 1,000,000 CR. And man, I love this hideous hunk of metal. Like some great floating brick, the Type-6 is a ship built entirely for purpose. It's bulky and utilitarian and it takes forever to come to a halt, but it can hold up to 112 tonnes when fully upgraded, making it a formidable trading vessel. One day I'll have the eye-watering 75,000,000 CR to blow on the colossal Type-9, but for now this is my ugly baby.

One thing bothered me about the Type-6, though. When I was listening to music, it never sounded like the audio was actually playing in the ship. So I went into my sound card settings and tweaked the EQ to give the impression that the music was playing out of speakers in its cavernous cockpit. It's amazing what a difference this makes, creating a surprisingly effective illusion of diegetic sound. This might seem slightly ridiculous, but when it comes to playing Elite, every fraction of extra immersion really adds to the experience.

I'm still very early in my trading career. The most profit I've made on a single transaction so far is about 500,000 CR. There are players out there making millions trading void opals, smuggling, and lord knows what else. But I'm enjoying myself at this level. I'm just a guy trying to make an honest living, in space, and having fun doing it. And if I get bored I can always use CMDR Leth's career chart to find something else to do. It's nice to finally find something in Elite that clicks, and fulfil my dream of being a space trucker.