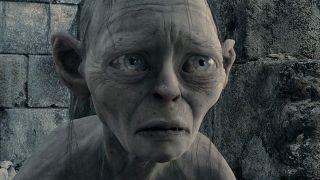 In March 2019, Daedalic Entertainment unveiled The Lord of the Rings: Gollum, an action-adventure game set in JRR Tolkien's famed fantasy realm. Nothing was said about the game itself, though, except that it "tells Gollum's story from a perspective never seen before ... while staying true to the legendary books." But the latest issue of Edge reveals more about what's in store, including that the lead character will not look like he did in Peter Jackson's films.

"We don't want to displease the folks who have only see the movies. But in short, he doesn't look like Andy Serkis. We started with the person he was and then evolved him. You can see that this was once something like a human being, before the Ring corrupted him," senior producer Kai Fiebig said.

"We have more storytelling possibilities than the movies ever had, and for us, it was very important to show a different set of emotions. We need somebody you could almost love, and on the other hand somebody you can really be afraid of. And at some points, trust me, you will fear him."

Edge describes The Lord of the Rings: Gollum as a fairly straightforward stealth game with an emphasis on climbing and platforming, and Gollum himself won't have much in the way of special abilities or skills: Daedalic said that it wouldn't make much sense to have him picking up and developing new skills now, after centuries of surviving on his own. Instead, the focus will be on the dichotomy of the character, who will be constantly torn between his Gollum and Sméagol aspects. But that won't come in a simple good-vs-evil context.

"It's not just choosing to be Sméagol or Gollum, because for Gollum as an entity it's not that easy. Each personality is being attacked by the other; each has to defend himself," designer Martin Wilkes said. And while the game will tell a set narrative that will conclude at around the start of The Fellowship of the Ring, the path leading to that point will vary based on the choices you make.

The Lord of the Rings: Gollum is currently expected to be out in 2021.