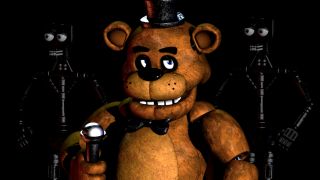 When Five Nights at Freddy's creator Scott Cawthon confirmed that the sixth installment of the FNaF series had been cancelled, he teased "maybe I’ll try my hand at a pizzeria tycoon game." Fast-forward to six months later, it looks like that's exactly what he's done.

The latest cover image on Cawthon's website—which was updated yesterday,—shows a 8-bit Freddy, a lo-fi pizza, and the legend: Freddy Fazbear’s Pizzeria Simulator. And that's it.

"I REFUSE to let an entire year go by without a game release, so I'm putting together something fun for all of you for the holidays," Cawthon said via a recent Steam update. "I'm not sure if I'll release it on Steam or Gamejolt yet, but I'll let you know. Hopefully it won't take much longer to wrap it up."

And… that's it. Between the update and the 8-bit teaser on the website, that's all we know for now, although Cawthon won't keep us waiting too long, it seems—he promises to "get the Steam page up within the next few days for the new game".

As for the movie? "I know that I promised movie news soon, but I guess that news will have to wait. It had to do with an exciting cast/crew addition, but things are not quite finalized yet so I'll give that some more time."